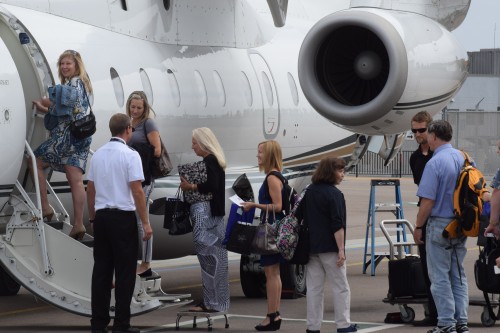 CARLSBAD–North County residents traveling to Las Vegas now have an alternative to San Diego International Airport. A new jet shuttle service to Las Vegas was officially launched Thursday at a ceremony at McClellan-Palomar Airport in Carlsbad.

BizAir, a 30-seat commercial carrier, will shuttle passengers on Thursdays, Fridays and Sundays from Carlsbad to Las Vegas.

The shuttle will be flying regularly scheduled flights to Las Vegas and that’s a first for McClellan-Palomar Airport, according to Horn.

“Regular flights to Vegas are just one more great reason to come to Carlsbad,” Horn said. “This airport is one of North County’s greatest assets. It’s convenient, it’s beautifully designed and you can even sit outside and wait for your flight.”

BizAir, which has been in operation for nine years, began service at the Carlsbad airport on June 18 with two daily flights to Los Angeles airport.

Tickets to Las Vegas start at $154, plus tax and no baggage fees. Passengers can enjoy complimentary snacks and adult beverages on all flights. 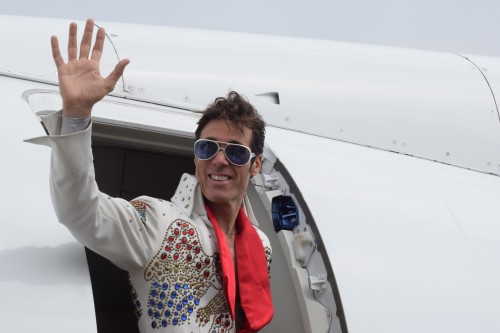 Like any other commercial airport, passengers must check in for flights and be screened by federal Transportation Safety Administration agents. But because McClellan is a smaller airport, passengers can escape the traffic, expensive parking and long security lines at major airports.

McClellan-Palomar offers curbside drop-off in front of the terminal and parking for $5 a day.

“If you think about the savings. An operation out of Carlsbad versus your alternative, a lot of people don’t stop and think what kind is worse,” Cretsinger says.

In September, BizAir will offer flights to Phoenix, Arizona, and to Oakland and San Jose at a later date.

“This is great news for the local economy,” said Carlsbad Mayor Matt Hall. “From our beaches to our restaurants, hotels, shopping, new visitors will be able to enjoy all that Carlsbad has to offer while supporting local businesses.”

McClellan-Palomar Airport is one of eight airports operated by the County of San Diego Department of Public Works and the only one that offers commercial flights for North County residents.

The County has made several improvements at McClellan-Palomar in recent years, including a $24 million renovation completed in 2009 that added a modernized, 18,000 square-foot terminal, parking and a restaurant.