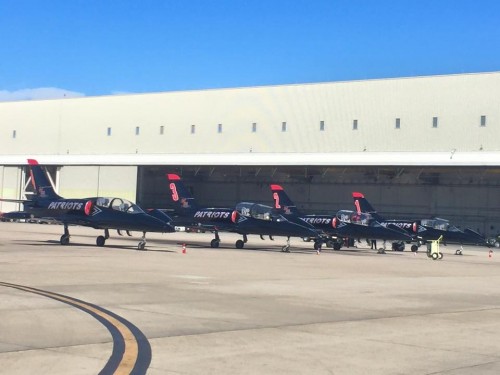 This year’s theme, “A Salute to Veterans and Their Families,” pays tribute to the Marines and sailors and their families.

There will be food and novelty booths, a children’s activity area, military displays, a trade show and more.

Gates at MCAS Miramar open at 8 a.m. The event is free and open to public.

All bags will be inspected, and all individuals are subject to search prior to entering the air show flight line. To accelerate this process, there will be checkpoints throughout the air station and at entrances to the flight line. It is recommended that spectators minimize the number and size of permitted items to reduce the inspection time prior to access into the flight line area. Please note that this security applies to all military and civilian personnel and is in effect throughout the year.

The following items are prohibited on the flight line and subject to confiscation:

. Weapons of any kind (regardless of permit) to include, but not limited to, firearms, knives (including pocket knives and multi-tools), replica or toy weapons, pepper spray, mace, stun guns, and martial arts weapons

. Pets, other than service animals

. Fanny packs and purses, or bags

. Baby diaper bags and strollers, if attending with an infant or small child (Stroller parking is available in a designated area behind the grandstands. Strollers are not permitted in the grandstand seating area.)

. Spectators are encouraged to stay well hydrated and drink plenty of water

. Unattended bags and packages will be removed from the premises

. Water will be available for sale throughout the air show area

. Wear comfortable footgear; the flight line is paved and you may walk long distances