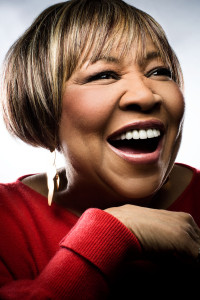 Over a 60-year career spanning diverse musical genres and profound social change, Rock and Roll Hall of Famer and 2016 Grammy nominee Mavis Staples has helped shape the soundtrack of the ‘60s, ‘70s and beyond. Celebrating the extraordinary gospel and soul music legend and civil rights icon, who rose to fame as lead singer of the legendary family group The Staple Singers, MAVIS! debuts Monday, February 29 (9:00 to 10:25 p.m. ET/PT), exclusively on HBO. Jessica Edwards directs the first feature documentary about this enduring performer.

As the civil rights movement gained momentum in the ‘60s, the Staple Singers became a mainstay at rallies led by Dr. Martin Luther King, whose favorite song was the group’s “Why? (Am I Treated So Bad).” They attracted the attention of musicians like Bob Dylan, who bonded with the group at the 1964 Newport Folk Festival and was admittedly enamored of its young lead singer. Dylan’s “Blowin’ in the Wind” (“How many roads must a man walk down/Before you call him a man?”) struck a chord with Pops, who decided to record it with the Staple Singers, marking the first time a group outside the folk scene covered a Dylan song.

From the Delta-inflected gospel sound she and her father helped pioneer in the ‘50s, to the message songs of the civil rights era, to the Staple Singers’ rise to mainstream stardom via secular hits like “I’ll Take You There” and “Respect Yourself,” to her recent Grammy-winning renaissance with help from Wilco’s Jeff Tweedy, Mavis’ history is equal parts music and activism. Today, the captivating 76-year-old singer’s message of peace and social justice resonates as strongly with audiences as it did when she was a precocious teenager. MAVIS! is the portrait of an electric personality deserving of the exclamation point in its title.