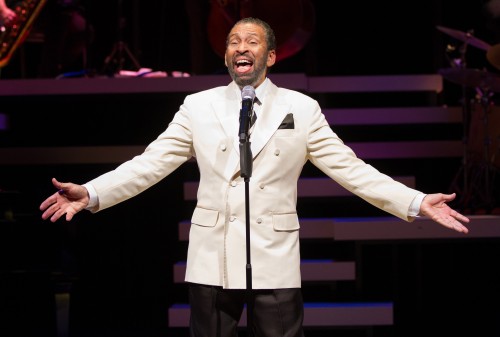 MAURICE HINES in MAURICE HINES is TAPPIN’ THRU LIFE at Arena Stage at the Mead Center for American Theater November 15-December 29, 2013. Photo by Teresa Wood.

WASHINGTON – The opening and closing images in Tappin’ Thru Life, a new and exhilarating Maurice Hines musical that opened November 15 and will run through December 29, 2013 at Washington, DC’s Arena Stage/The Mead Center for American Theater, has the Tony Award Nominee and Helen Haynes Award Winner for Outstanding Choreography, Maurice Hines, serving as the master of ceremony guiding us through 50 fabulous years of unforgettable music history. The musical features Maurice and his brother, the late great tapper, Gregory Hines, interactions with the likes of Lena Horne, Ella Fitzgerald, Frank Sinatra, Pearl Bailey, Duke Ellington, Judy Garland, Sammy Davis, Jr. and a host of illustrious icons of the golden age of dance and song.

The real stars of this 90-minute song and dance show is, of course, the Hines Brothers, which has loving tributes to Maurice’s parents, the late Maurice Hines, Sr. and Alma Hines. Maurice Hines, Sr. sons, Maurice and Gregory, had performed professionally as the Hines Kids since they were young boys in the 1950s, tap-dancing onstage at the Apollo Theater in Harlem and touring.

By 1963, his sons decided to emphasize singing in addition to dancing and asked their father to join the group. The elder Hines had been a salesman for White Rock soda when he taught himself to play the drums.

Father and sons toured until 1973, performing in nightclubs in New York, Las Vegas and Europe. They also appeared on TV variety and talk shows.

“The highlight for us was when Johnny Carson saw us at the Playboy Club in Chicago and told us ‘I’m going to put you on my show,’” Maurice shared with the audience, while laughing at the recollection because the trio had seven failed Tonight Show auditions.

“He was true to his word, and he put us on many times,” Maurice fondly recalled. “He made us stars and made us hot in the business.”

Maurice’s personal and poignant story telling and occasional still pictures of the Hines family performing with the legends of dance and music flashing on the screens offered indisputable evidence of their great gifts as dancers beyond all the astonishing acrobatics. From the start, as child dancers in the early 1950’s, Maurice and Gregory Hines’ dance acts combined a little of everything put together with unifying punch and elegance.

Tappin’ Thru Life has several moments when Maurice serenades and performs jazzy and swinging classic tunes like Smile (a song based on an instrumental theme used in the soundtrack for the 1936 Charlie Chaplin movie Modern Times. Chaplin composed the music, while John Turner and Geoffrey Parsons added the lyrics and title in 1954), Nobody Loves Me (a blues song written by Pinetop Sparks and his brother Milton Sparks or Marion Sparks. The song was first performed in the taverns of St. Louis by the Sparks brothers and was recorded July 28, 1935 by Pinetop with Henry Townsend on guitar. In 1949, Peter Chatman, better known as Memphis Slim, recorded the song as “Nobody Loves Me”. Although he used the Sparks brothers’ opening verse, he rewrote the remainder of the lyrics and sang the melody in a normal pitch), Fats Waller and Andy Razaf’s Honeysuckle Rose was sung by Maurice with superb assistance from the orchestra. 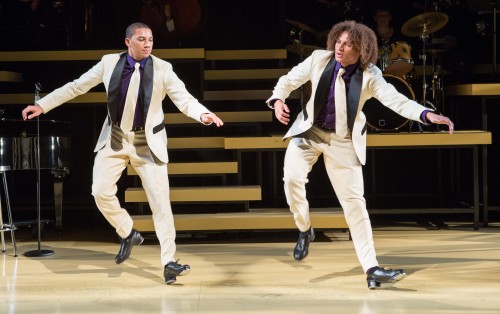 (L-R) John and Leo Manzari in MAURICE HINES is TAPPIN’ THRU LIFE at Arena Stage at the Mead Center for American Theater November 15-December 29, 2013. Photo by Teresa Wood.

But it was the last song of the evening that literally brought tears to Maurice and members of the audience. Maurice Hines, Jr. ended the tribute to Gregory by performing a delicate soft-shoe tap routine he said was being done as a duet with his father. Then, after holding back tears, he sang a song he said he had sung only once before, to Lena Horne. It was Too Marvelous for Words, a popular song written in 1937, with Johnny Mercer writing the lyrics and music composed by Richard Whiting.

Tappin’ Thru Life has a line-up of young tappers such as John, 21, and Leo Manzari, 18, brothers who consider Maurice as a mentor. In addition to the Manzari Brothers there are the very young and talented Heimowitz Brothers consisting of 13 year-old twins Max and Sam Heimowitz. The Manzari Brothers gave the audience a classic demonstration of their versatility in the Hoofers technique of tap dancing. The Hoofers tappers are tap dancers who dance primarily closer to the floor, using mostly their footwork and not showing very much arm or body movement. This kind of tap dancing is also called rhythm tap.

John and Leo will do well to follow in the traditions of the great tappers such as Jimmy Slyde, Sammy Davis, Jr., Bill Bojangles Robinson, Alice Whitman, Charles Honi Cole, Fred Astaire, Ginger Rogers, Bunny Briggs, Harriet Browne, Savion Glover, and Gregory Hines. What made these immortal tap dancers so unique is the personality and finesses they brought to the stage. They were tap dancers of extraordinary elegance whose personal style and technical precision epitomized the class-act dancer. We can look with great expectation as John and Leo Manzari blossom into more graceful dancers in the years to come.

Throughout his entire time on the stage, Maurice Hines could not stop moving. Even when relatively stationary talking with the audience and cracking jokes when in between songs, this effusively good-natured dancer, choreographer and singer, who recently turned 70, shuffles his feet, rotates his legs and twitches with an uncontainable urge to swoop and tap. You might say he is driven by a compulsion to swing.

Maurice shared with the audience one of his most treasured connections was with his younger brother, Gregory, who died of liver cancer in August 2003 at the age of 57. Maurice helped plan his brother’s memorial at New York’s Apollo Theater in late 2003. “As far as I’m concerned, Gregory was the greatest tapper I ever saw,” says Hines. “[At the 2003 Memorial] I did a number where I tapped with Gregory, with an empty spotlight. And the audience loved it. And it was very real; it was a real moment.” Maurice reenacts that dance routine with gentle and warm details in Tappin’ Thru Life.

Maurice had powerful support from the Diva Jazz Orchestra, a nine-woman ensemble led by the show’s musical director and principal drummer Dr. Sherrie Maricle. Dr. Maricle is not only the musical director for Diva Jazz Orchestra, but also Five Play and The Diva Jazz Trio. She is also the drummer for The New York Pops and enjoys a varied career as a performer, composer and teacher. Her bands have performed at many of the world’s most acclaimed music venues. They have been featured on CBS Sunday Morning, the 25th Anniversary of the Kennedy Center TV Special and NPR’s Piano Jazz. Dr. Maricle has received several awards and honors, most notably the Kennedy Center’s 2009 Mary Lou Williams Lifetime Achievement Award. The orchestra is no sedated slow-dance ensemble in the sugary band tradition of swing. Its pop, two-fisted sound, built around three saxophones, a pianist, bass player, two trumpets and a trombone, is blunt, aggressive and hard-edge!

Many musicals save their best numbers until the very end, but Tappin’ Thru Life is the first musical I’ve seen that saves its best number until after the very end. It isn’t until this show is officially over, until the curtain calls are under way, that its stars have left the stage that the very few people still mulling around got the chance to hear the orchestra perform an absolutely riveting and swinging selection. By the time the ensemble finished the five minutes selection, the select few were sent out of the theater satisfied, humming happily, and believing that we could truly tap.