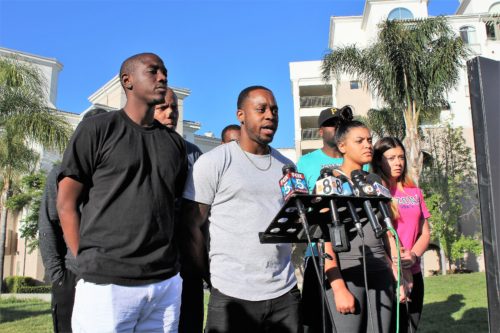 The group Tuesday held a press conference in front of the La Jolla Crossroads condominium complex in the 9000 block of Judicial Drive.

They say the gunman, 49-year-old Peter Selis, who was a resident at the complex, targeted them based on their race.

Mychal Gary, one of the survivors at the pool party, took issue with Selis being portrayed in public as a victim due to his personal and financial struggles.

“I do feel that it’s being portrayed that this was out of passion that he was a hurt person and I don’t want him to become the victim because of him becoming emotional and making a decision that changed to multiple people’s lives,” Gary told reporters.

Gary believes Selis had intentions to shoot at the group who were celebrating tenant Kion Gould’s 47th birthday that Sunday in the pool area.

“Kion, my roommate, offered this man a drink. There was no animosity. There was no type of negativity. This man didn’t even speak to us,” Gary said.

On April 30, just after 6 p.m. San Diego police received multiple calls of a shooting in the pool area of the condominium complex. Police officers found that Selis, armed with a handgun, had shot seven people who were celebrating a birthday in the pool area. Selis opened fire on the group while he sat near the pool area drinking beer, according to authorities.

The victims, four black females, two black males, and one Hispanic male were rushed to local area hospitals. One woman, Monique Clark, a 35-year-old mother of three, died at the hospital. Another black male sustained a broken bone while fleeing the area. He was not shot.

A Hispanic female security guard was shot at by Selis, but she was not struck, according to investigators.

Police officers confronted Selis who was still in the pool area during the rampage. Selis began shooting at officers who returned fire, striking Selis. He was pronounced dead at the scene.

Selis was in financial debt, and despondent after his girlfriend broke off his relationship with him, San Diego Police Chief Shelley Zimmerman said at Sunday evening’s press conference.

“There is zero information that it was a hate crime. He made a terrible chose,” Zimmerman told reporters at the scene.

Lauren Chapman, one of the party attendees, still believes they were targeted based on their race.

“The people that were there that day in that area I think is sound proof that this was partially, to some in fact, a crime full of hate, or a racially motivated crime,” Chapman said. “When we had our friend laying on the ground, and we had another friend trying to tend to her, and he directed our caucasian friend not to aid the black woman on the ground.”

Chapman added that the Selis told her friend that “she was allowed to leave” the pool area.

“Our group was chosen that day, and it’s very hard to look passed the makeup of what our group was,” Chapman added.

The group is asking authorities to pursue further investigation into the possible racially motivated shooting as a closure for the victims, families, and others who were traumatized by the incident.

“It’s something we need to talk about,” Chapman said.

The group plans to meet with San Diego Police Chief Shelley Zimmerman to address their concerns about the investigation.