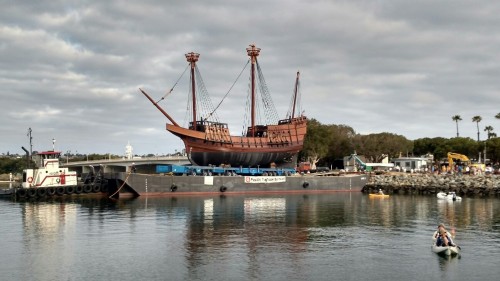 The San Salvador is the embodiment of California’s origin story. The voyage in 1542, with Juan Rodríguez Cabrillo at the helm, established California as one of the places in America’s landscape where we can say our country truly began.

Crews transferred the San Salvador onto a self-propelled trailer, donated for the project by Marine Group Boat Works, then placed the ship onto a shallow draft barge Wednesday morning for transit to Marine Group’s boatyard in Chula Vista. The San Salvador will remain at the boatyard until her debut Labor Day weekend at the Port of San Diego’s 2015 Festival of Sail, hosted by the Maritime Museum of San Diego.

“This is a truly monumental day for the Maritime Museum of San Diego, our dedicated volunteers, generous donors, the San Diego region and the State of California,” said Dr. Ray Ashley, CEO of the Maritime Museum of San Diego. “Recreating the San Salvador has been years in the making. We have celebrated many milestones along the way, but launching the ship is a moment we’ve been waiting for since the beginning.”

Built for trade, the original San Salvador was a three-masted ship of 200 toneladas, meaning it could carry 200 barrels of wine. It was the capitana or flagship for the expedition of explorer Juan Rodriguez Cabrillo in his attempt to discover the wind patterns of the North Pacific and establish a route to China. While the San Salvador did not make it to China, it was the first European ship to explore the Pacific coast of what is now the United States.

The present day San Salvador was built at Spanish Landing in San Diego between 2011 and 2015 by the Maritime Museum of San Diego and its legion of approximately 500 volunteers. The vast majority of funds spent during construction were contributed by donors. The Port of San Diego offered use of Spanish Landing Park, allowing thousands of spectators to witness the ship’s progress.

“The San Salvador is a mighty symbol of our region’s proud maritime heritage and carries with it the dreams and hopes of generations of San Diegans,” said San Diego County Supervisor Greg Cox. “My thanks to the many volunteers who worked so hard on this project.”

The ship matches the original in size, weighing 150 tons and measuring 92 feet long by 24 feet wide. The materials used to construct the San Salvador came from across the globe, including: Angelique wood from Suriname, Sapele wood from Nigeria, Southern Live Oak from the U.S. state of Georgia and Douglas Fir from the Pacific Northwest.

“You can see the dedication in every bit of the San Salvador, from the keel to the deck,” said San Diego Mayor Kevin Faulconer. “We are thankful to the Maritime Museum for their resolve in building such a fine ship and offering it to the region as an educational opportunity for not only our children, but every San Diegan and visitor interested in exploring our origin story.”

The ship will now carry out its mission as a floating classroom, and sail up the California coast, offering a unique opportunity to see history coming to life.

The Maritime Museum of San Diego has one of the world’s finest collections of historic ships, including the world’s oldest active ship, the Star of India. The museum, located on the North Embarcadero in downtown San Diego, is open to visitors daily. For more information, visit www.sdmaritime.org.