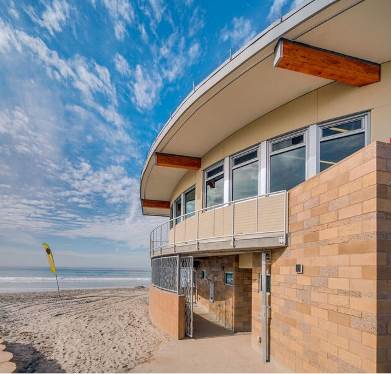 To celebrate the occasion, the public was invited to attend the event, along with city leaders and lifeguards. After the ceremony, the tower was open for tours.

The Marine Safety Center is the first modern lifeguard tower in San Diego county, according to the City of Encinitas.

Designed by Stephen Dalton Architects of Solana Beach, this two-story lifeguard station is carefully crafted to enhance safety operations and withstand its coastal environment. Its sweeping second floor walls and roof lines recall rescue boats and ocean waves while also allowing ample daylight to enter the facility. Operationally, the building acts as a “tool box” for lifeguards, with every space serving multiple functions and minimizing wasted space. Keeping the station size to a minimum resulted in more beach area for public use. Stephen Dalton Architects also designed the restroom/concession and garage structures built with the first phase of the Moonlight Beach renovation.

The center was built by EC Constructors Inc. of Lakeside. The facility includes a first aid room; locker, storage, and restroom areas; a sheriff desk and workstation; and observation space on the second story. A 360-degree deck affords the lifeguards views of the water, the beach, B Street, C Street, and the Moonlight State Beach parking area. A crow’s nest of the roof further enhances the ability to monitor the beach. EC Constructors also built the recently reconstructed restroom/concession and lifeguard garage buildings at Moonlight Beach.

The final complete project budget is $3,896,465, including all design, special studies, construction, and construction engineering.

The City of Encinitas was honored with a Public Works Project of the Year Award for Moonlight Beach Marine Safety Center. The award, which was presented on May 24 by the American Public Works Association San Diego and Imperial Counties Chapter, was established to promote excellence in public works projects by recognizing the partnership between the managing agency, the consultant/architect/engineer team, and the contractor, who work together to successfully complete outstanding projects for the community.

The center successfully competed against other structures in the $2M-$5M budget category for the honor of the award. Selection criteria included considerations such as the degree to which the project enhances a public service or facility; environmental concerns and actions for mitigation, enhancement, or avoidance during project development or construction; quality control, safety, value engineering, and construction innovation; and accomplishments under adverse conditions including weather, soil, traffic, site conditions, space, time budget, or other conditions over which there was no control.