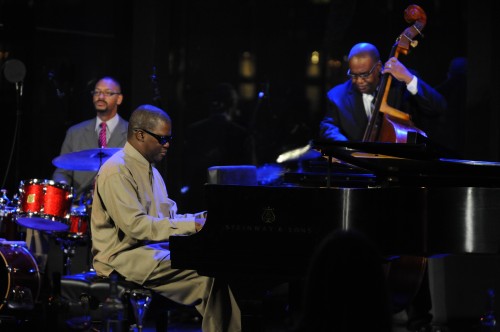 NEW YORK, NEW YORK — The late Shirley Valerie Horn, an American jazz singer and pianist, shared with me in a conversation at a Washington, DC jazz event back in 2002 her thoughts of pianist, composer, arranger, and jazz educator Marcus Roberts: “Marcus is probably the best musician around today who can play Harlem Stride piano in the style of Bud Powell, James Johnson, Art Tatum and Earl Hines all rolled into a sound that is uniquely his own.” Horn collaborated with many jazz greats including Miles Davis, Dizzy Gillespie, Toots Thielemans, Ron Carter, Carmen McRae, Wynton Marsalis and others. And if there is anyone who knows jazz piano – Shirley knew what she was talking about.

The Marcus Roberts Trio consisting of drummer Jason Marsalis and bass man Rodney Jordan, brilliantly and succinctly demonstrated at his September 19-22, 2013 standing-room only performances at New York’s preeminent Jazz At Lincoln Center Dizzy’s Club Coca- Cola, just how creative he can be in combining the stride, bop and modern piano styles when playing ballads and up-tempo songs like the 1940 Don’t Get Around Much Anymore, a jazz standard with music by Duke Ellington and lyrics by Bob Russell, Thelonious Monk’s Light Blue, and Cole Porter’s After Midnight. It’s true that singers sing notes, but the word evokes through Roberts’ extraordinary piano performances are truly special events. There has to be a classier term for what the Marcus Roberts Trio plays. Notes just don’t cover it.

Judging from his Sunday, September 22nd performance, you would have to say that Roberts played entire epistles, love letters to the soul; every sound that left his fingers on the keyboard was resonated with waves of emotion, written lovingly in longhand with pen and ink.

Anyone who has ever heard Roberts play after hours in a setting of his own choosing will hear out the fact that he is a completely different Marcus Roberts from the one who plays either in a concert hall, jazz concert or on records. The fabulous technical facility of Dizzy’s was cleverly exploited by Marcus and used as it should be used – to present and exploit the creative power which sets Marcus Roberts from other jazz pianists.

The Marcus Roberts Trio seems to have come alive as the crowd cheered them on. At Dizzy’s, Roberts was playing for a selected audience who warmly embraced his music, even his arrangements take on a new dimension. Take for example his take on Monk’s Light Blue – bass man Rodney Jordan opens up as a minor blues with a quiet bass solo that rises in volume and variations and then moves into a strong, repeated boogie-like figure that does indeed seem to be marching implacably forward, filled with determination. Very quickly Roberts, accompanied by the sweet hush sounds of Jason Marsalis’ drumming, joins in with more strong repeated figures, turning the determination into sheer bellicosity! The intensity in Light Blue rises, there are shouts and cries from the audience as Jason goes through a riveting five minute solo, which concludes with Roberts ending his improvisation with a striking high note with a three-note stroke from Marsalis closing the performance.

The first one — the seminal one — happened when Roberts was eight, and he collided with a new piano in his home in Jacksonville. He had been blind for four years, and was not so much startled as seduced. “I sat right down,” Marcus says, in his soft but insistent voice. “I thought, `This, apparently, is for me. I could work on this all day.'”

A bit shy of two decades later in 1988, Roberts, 25 at the time, found himself with an album that had climbed to the top of the Billboard Jazz chart. The 1988 release of The Truth Is Spoken Here is a “dexterous and loving homage, a tribute,” Roberts says, “to the artists who were the masters of the form.” There are two Ellington compositions, In a Mellow Tone and a supernal rendition of Single Petal of a Rose, and a version of Thelonious Monk’s classic Blue Monk that Roberts brings off with such light witchery that the song sounds reborn. Truth (which also boasts five Roberts’ originals) had all the well-studied funk of the new jazz sound of the day combined with the old strides of the past.

This is no coincidence. From 1985-1991, Roberts was Wynton Marsalis’ man on piano for both touring and recording. Marsalis plays trumpet on Truth, and his brother Delfeayo produced the album. The result was the righteous precision Marsalis brings to his playing, but this was Roberts’ showcase.

Marcus told me he started “casually messing” around on the piano when he was five, picking out notes when he accompanied his mother and father to church. It was these little improvs that led his parents to buy a piano. Roberts’ mother was a gospel singer, his father a longshoreman, and it was no easy thing to come by money. At first young Marcus taught himself, and after a year he was good enough to play in church. He played with one hand or the other, but still hadn’t figured out how to make both works together. “Horrible hand position,” he remembers. At twelve, he started to take formal lessons in doing what came naturally.

He was beginning to find his own way. There were other lessons to learn. His teacher played him some Art Tatum. “Does he have three hands?” “It was the first time I heard something I couldn’t see myself doing,” he confessed. He kept on learning and playing.

Roberts’ Technique and Body of Work is Perpetual 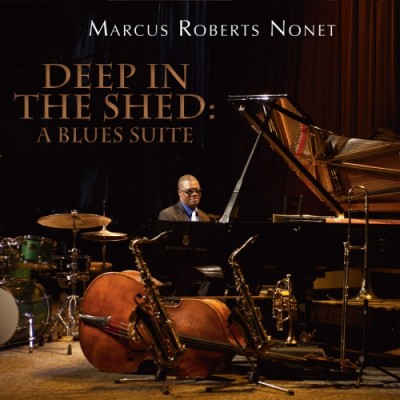 Listen attentively to Marcus Roberts’ body of work and you will discover that when playing non-classical repertoire, he works from what might be called a classical conception. Most contemporary jazz pianists of Roberts’ generation, even those with formal training, never approached his command of counterpoint, harmony, and texture at the keyboard. In fact it is difficult to find a single complete chorus of jazz improvisation in his entire discography. One hears, rather, a wonderful and weird cross between a jazz oriented pianist and one who is, at various times, decked out in Chopin, Debussy, cocktail filigrees, and Frankie Froeba.

Roberts favors 32-bar tunes by composers like Gershwin, Cole Porter, Irving Berlin, and Richard Rogers for his public performances – and the cat can play some mean blues! One need not to go far than to check out Roberts’ 2012 release of Deep In The Shed: A Blues Suite to get a taste of his blues tenacity. Here you have Roberts playing various tunes in B-flat, but after that he went to every key in the ladder.

Marcus Roberts may be the most underestimated jazz pianist working the circuit. And he has always mystified fans and critics alike. It isn’t that he is difficult to listen to, but that he requires concentration. Too many jazz lovers are seduced by and dependent on the beat, which Roberts withholds and reshapes. What is most astonishing about his music is not the digital control, but the shifting harmonies and rhythms that he modulates and controls as to no other musician can do.

Roberts’ deep respect for the contributions and achievements of the great masters of jazz and classical music has led to his highly innovative and original piano style and philosophy of jazz improvisation. He is also an extremely active composer and arranger, with numerous individual compositions and entire suites of music including Romance, Swing, and the Blues, Deep in the Shed, Time and Circumstance, In Honor of Duke, From Rags to Rhythm, and The Sound of the Band. He has received various commissioning awards, including ones from Jazz at Lincoln Center, Chamber Music America, ASCAP, and the North Carolina Association of Jazz Educators.

Reticent about his personal life, he still lives in Florida, Roberts is zealous about jazz. “Children don’t get a chance to hear much jazz,” he says. “If you eat at McDonald’s all your life, then you won’t like broccoli the first time you taste it.” When Roberts is working the keys, though, he serves up jazz that is not only knowledgeable but accessible.

Contemporary jazz can be too hip to draw in the listener: the more intrepid the music, the more insistent it seems about sealing itself off. Roberts’ gift is to keep connected to past masters like Monk, Ellington, and Tatum while extending the music’s possibilities and its audience into the future with a light and open hand.