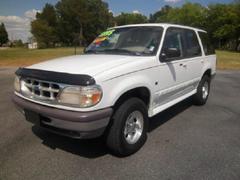 Authorities release a photo of a similar vehicle driven by the suspect.

SAN MARCOS–Authorities are looking for a male driver who struck two pedestrians Sunday afternoon in the Home Depot parking lot in San Marcos.

San Marcos Deputies were dispatched to a call of a hit and run collision involving a vehicle and two pedestrians in the Home Depot parking lot located at 550 West San Marcos Boulevard.

First responders located a 65-year-old adult female on the parking lot pavement being consoled by a 60-year-old adult male. Both victims, who are married, were walking in the establishment parking lot when they were struck from behind by a late model white Ford Explorer/Expedition.

A witness observed the collision and described the suspect driver as a Hispanic young adult male wearing dark clothing. The suspect driver fled in the vehicle eastbound from the parking lot. San Marcos Paramedics treated both victims at the scene and later transported the female victim to Palomar Medical Center for additional treatment and observation. The male victim sustained minor abrasions and a complaint of pain to the lower extremities. The female victim sustained severe head trauma with bleeding on the brain, bilateral pelvic fractures and abrasions to her upper torso. She was admitted for serious but not life threatening injuries.

The driver of the SUV is described as in his mid to late 20s with light colored hair. He was clean shaven and was last seen wearing a light colored shirt.

The suspect’s SUV is described as a 1995-2001 model white Ford Explorer. The vehicle was described as being dirty at the time of the hit-and-run. It may have damage to one or both of the front headlight assemblies.

It is unknown if alcohol was a factor in this collision. The San Marcos Traffic Division is conducting the investigation.

Call Crime Stoppers at (888) 580-8477 with information and you will remain anonymous. Email and text messages can be sent to www.sdcrimestoppers.org. You may be eligible for up to a $1,000 reward for information leading to a felony arrest.