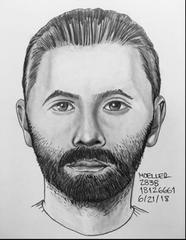 A sketch of home burglary suspect.

SAN MARCOS–Sheriff’s deputies are searching for a suspect in connection with the burglary of an elderly man’s home in unincorporated Escondido.

Investigators with the San Marcos Sheriff’s Station are asking the public’s  help in identifying and locating the suspect..

The incident occurred, just after 4 p.m., on May 23 at a home in the 600 block of Via Rancho Parkway. The suspect posed as a water district employee and contacted the homeowner.

The suspect told the victim he needed to come inside the home to inspect the plumbing. Once inside, the suspect lured the victim to the backyard and distracted him. That’s when another suspect went into the house and stole the victim’s valuables.

The suspect is described as a white man, 5’10” tall and weighing 160 pounds. He has short black hair and a black beard. The suspect has a light complexion and was able to speak in a Russian sounding language. He was wearing dark color clothing that resembled a uniform.

Visit the Crime Stoppers website at www.sdcrimestoppers.org for more information on how to send anonymous web and mobile app tips.