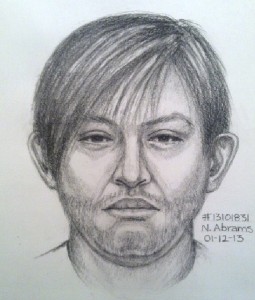 VISTA–Crime Stoppers and detectives from the Vista Sheriff’s Station are searching for a suspect wanted in connection with an attempted kidnapping of a 11 year-old boy in Vista.

On January 10, at 5:30 p.m., the boy was walking home from Madison Middle School on South Melrose Drive near the Albertson’s Grocery Store. The boy noticed a man was following him. After walking for about a half mile, the suspect suddenly chased after the boy. The boy tried to escape, but was grabbed by his backpack. The boy let the suspect take the backpack and continued running away.

The suspect is described as a Hispanic male adult, between 30 to 40 years old with a dark complexion. He has a normal build with a double chin and pronounced ears. The suspect was carrying a skateboard and was wearing dark jeans, a white long sleeve collared shirt with rainbow stripes, and black “baseball batting” gloves.