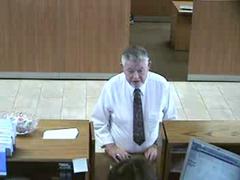 Surveillance photo of the suspect.

SAN DIEGO–San Diego County Crime Stoppers and investigators from the North Coastal  Sheriff’s Station are asking for assistance from the public to help identify and  locate a man wanted in connection with fraud, identity theft, and burglary.

Sometime between March 18 and 21, a man used a fake I.D. and documents to get a debit card to access the victim’s bank accounts. The suspect then withdrew $90,000 in cash from Chase Bank branches at 1641 South Melrose Drive in Vista; 2663 Gateway Road in Carlsbad; 2219 Palomar Airport Road  in Carlsbad; 2770 Via De La Valle in Del  Mar, and 1921 West San Marcos Blvd. in San Marcos.