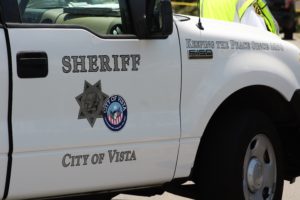 VISTA–Authorities are searching for several suspects who shot a man in his back Wednesday in Vista.

At 12:15 a.m., Sheriff’s deputies responded to the area of West Connecticut Avenue and North Santa Fe Avenue for a report of gunshots heard in the area. While heading to the area additional people called to report a person had been shot.

Deputies arrived to find a 29-year-old male victim suffering from a gunshot wound to his back.

Deputies tended to the victim until paramedics arrived on scene. The victim was transported to hospital where he was admitted with non-life threatening injuries.

The suspects were described as multiple Hispanic males driving a black sedan. A search of the area turned up negative for the suspects.

Detectives from the Vista Street Narcotics and Gang Detail responded to the scene. The crime is being investigated as a gang-related shooting.

Detectives are asking that anyone with information related to this incident to call Sheriff’s Dispatch at (858) 565-5200.