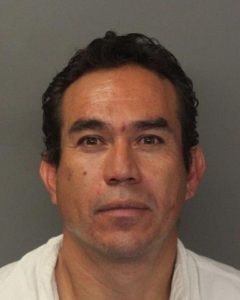 SAN DIEGO–Investigators have identified a man who allegedly broke into a Mountain View residence and tried to sexually assault an adult female on May 27.

San Diego police says the suspect, 47-year-old Alejandro Avila Ibarra entered the home, located in the 3900 block of T Street, at 4:53 a.m., and grabbed the victim inside the front entrance of her residence and attempted to sexually assault her.

A fight ensued and Ibarra is believed to have sustained a severe injury to the fingers of one of his hands- likely his left hand. Ibarra fled the scene and is now wanted for the assault.

Ibarra is described as a Hispanic male, medium build, 5’8” tall and approximately 180 lbs. At the time of the assault Ibarra was wearing a white t-shirt, black pants, and an unknown color sweater.

Anyone with information on the location of Alejandro Avila Ibarra is asked to call SDPD’s Sex Crimes Unit at (619) 531-2210 or the Crime Stoppers anonymous tip line at (888) 580-8477. Crime Stoppers is offering up to a $1,000 reward to anyone with information that leads to an arrest in this case.   Anonymous email and text messages can be sent via www.sdcrimestoppers.org.