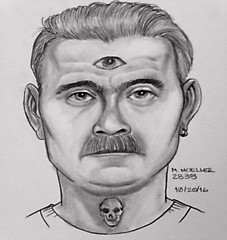 IMPERIAL BEACH–Authorities are searching for a male adult who attempted to abducted a juvenile in Imperial Beach Wednesday afternoon, Sheriff’s department said Thursday.

Investigators say between 5:00 and 5:15 p.m., an 11-year-old was riding a scooter on 13 Street and Fern Avenue in Imperial Beach. A newer model (2015-2016) Royal Blue, lifted Ford F250 pick-up, pulled over and stopped near the child. The passenger, a white male adult with salt and pepper hair slicked back, and a large salt and pepper mustache, exited the truck and attempted to grab the child. The man, approximately five feet, eleven inches tall, weighing 180 pounds, had numerous tattoos that included an eyeball on his forehead and a skull on his neck. The child was able to escape to a nearby relative’s home. The child was not injured, and it is unknown as to where the occupants of the truck fled to.

The suspect is not known to the child, nor was the child able to obtain a license plate number for additional information. There is no description of the driver available at this time.

Anyone who recognizes the man, or has information on his location, call the Sheriff’s Department at (858) 974-5200.