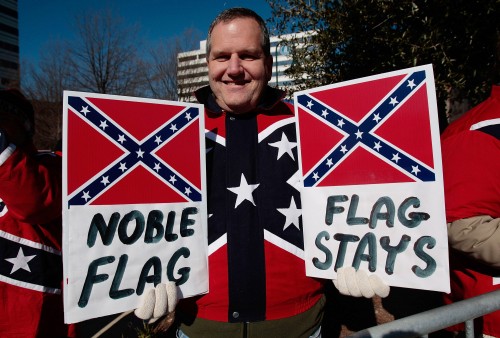 CHARLESTON, SC – Judging from this past Sunday’s cable and network news shows such as Face the Nation, Meet The Press, Fox News Sunday, CBS Sunday Morning, ABC This Week, and CNN, one point was made very clear: Prominent Republican politicians these days do not want to talk about the Confederate Flag and racism in the wake of the Charleston Massacre. After the racially motivated Charleston shootings this past week, South Carolina Governor Nikki Haley (R), GOP presidential candidate U.S. Senator Lindsey Graham (R-SC), and South Carolina’s newly elected Black U.S. Senator Tim Scott (R), are facing pressure to take down the flag, which is still flying high at a Confederate War memorial on state house grounds.

Governor Haley heeded the calls, and her staff says it’s up to the general assembly. Her fellow South Carolinian Senator Graham, meanwhile, defended the flag flying in his home state by telling CNN on Friday that it is “part of who we are.” While Senator Scott stated on Friday and on Sunday’s Face the Nation, “The flag had nothing to do with what this monster did…and is a separate conversation I look forward to having in the near future.”

Not every Republican agrees. Mitt Romney, who has opposed the flag before, issued another well-circulated call to take it down on Saturday. “Take down the Confederate Flag at the SC Capitol. To many, it is a symbol of racial hatred. Remove it now to honor Charleston victims,” he wrote. As did a key religious conservative. “That sort of symbolism is out of step with the justice of Jesus Christ,” wrote Russell Moore, a leader in the Southern Baptist Convention.

The statement by Russell Moore is worth exploring because it provides the missing link as to how the topic of racism in America and the Confederate Battle Emblem keeps getting drowned out by clever politicians who want to avoid the issues.

It’s ironic that after 150 years since the end of the Civil War, we are still haunted by the political, religious, human, psychological, and economic toll the bloodiest war in our nation still has on us. It must be noted that the Confederate States of America (CSA) would not have been possible, and Jefferson Davis would not have been elected its first and only president, if it had not been for the financial and moral support of the southern churches, synagogues, and prominent land owners of the south.

Rabbi Abraham Joshua Heschel was one of the 20th Century’s greatest human rights advocate, and was a close friend and confidante of Dr. Martin Luther King, Jr. Rabbi Heschel held an important role in the 1963 National Conference of Religion and Race in Chicago. The convocation sparked the participation of clergymen in the great march on Washington later that year. Rabbi Heschel delivered the main address: “One hundred years ago emancipation was proclaimed. It is time for the white man to strive for self-emancipation and set himself free from bigotry. “The greatest sin he declared, is that of indifference: “Equality is a good thing…what is lacking is a sense of the monstrosity of inequality.”

Few issues demand a more thorough and sober discussion than that presented by racism and the Confederate Flag. It is obvious that throughout all the discussions, debates and harsh words communicated back and forth between opposing sides on this issue, it appears that the great majority of predominantly white Evangelical Protestant churches in the south have been silent on this issue. Could it be that the very men and women who support the Confederate Flag being displayed openly across the south are sitting in congregations and pulpits? Could it be that the majority of white southern ministers refused to openly voice opposition to the flag and racism because they truly believe in it?

For at least three reasons every Christian minister, rabbi, priest or spiritual leader in the south, and the country for that matter, should feel obligated to speak to their congregations on this controversial issue:

First Reason: The widespread influence of the Confederate Flag and racism has, like a large tidal wave, permeated into the consciousness of the American way of life for well over two centuries. The Southern Poverty Law Center, a non-profit organization dedicated to studying hate groups in the United States, estimate there are over 500 racists and Neo-Nazi hate groups in the U.S, and the great majority of them use the Confederate Flag or the German Swastika as a symbol of defiance. Sadly to say, half of these groups claimed to be Christian organizations.

Second Reason: The Confederate Flag is a serious rival to everything Jesus Christ stands for. No true believer or follower of Jesus Christ would dare openly confess that the very person whom they say expounded the virtues of love and respect for all people unconditionally [Jesus Christ], would turn around and wave a Confederate Flag in defiance of the government. For it was Christ who said, “render unto Caesar the things that are Caesar, and unto God the things that are God’s.” 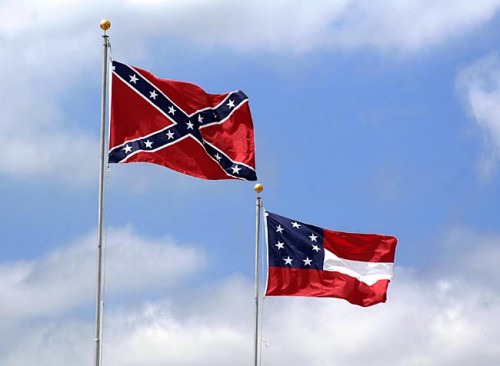 Third Reason: There are no politicians, religious leaders, or supporters of the Confederate Flag who can give us a biblical or Christian perspective why it is acceptable to embrace the flag. Any objective analysis of the Confederate Flag will conclude that that it was created on the premise of hate and materialistic support for human slavery. The CSA created the original Confederate Flag as a symbol of an economic and political system that was to be separate from the Union. In essence the south refused to allow its three million slaves living in bondage in the 1860s to experience freedom. The CSA, aided by so-called white Christian churches and Jewish leaders, believed passionately that God would aid them to preserve its slavery system and usher in a new society.

Maybe this is what the alleged Charleston Massacre shooter Dylann Roof was referring to in his manifesto when the vast majority of the rant, which displays some unusually sophisticated language if all of it was written by Roof, a ninth-grade dropout, reveals a deep hatred of minorities — particularly Blacks — and a strong belief in racist stereotypes. “Negroes have lower Iqs, lower impulse control, and higher testosterone levels in generals,” the manifesto declares. “These three things alone are a recipe for violent behavior.”

It observes that “if we could somehow destroy the jewish identity, then they wouldn’t cause much of a problem” and that there are “good hispanics and bad hispanics,” many of whom, it says, “are White.”

The results of such twisted thinking are written in the history books and are repeating themselves all too often with violence.

Churches, synagogues, and mosques throughout the nation are challenged to dedicate their congregations to the cause of righteousness as seen by God. This is even more urgent for the southern white churches than most others because the Civil War’s first shots were fired from Ft. Sumter, South Carolina and the issues of the Confederate Flag must end there.

For so many southern churches rooted in the urban enclaves of Charleston and other southern cities and rural areas, believe the integration of the races was the work of the devil and must be corrected. When you have Republican politicians and Tea Party organizations castigating President Barack Obama as the “Anti-Christ” you don’t need to wonder why the Dylann Roofs/hate groups commit acts of terrorism on Blacks.

Evangelist Fred Price, founder and leader of the Crenshaw Christian Center in Los Angeles, stated that “The American Protestant church is one of the most racist institution on planet Earth, but it should not be, because we claim to be the possessors of the true knowledge of God. The God of the Bible is not and never has been racist or racially prejudiced.”

The problem with the church is not the Bible, Price notes emphatically. It’s those who have interpreted it, or, more accurately, misinterpreted it. “Some people are saying that because people took the Bible, manipulated its message and used it as a reason to justify the enslavement of and mistreating of a race of people for no other reason than the color of their skin, we ought to dump the Bible. But the Bible has not been the problem, it has been the so-called purveyors of biblical teachings.”

Just as Dr. King and Rabbi Heschel formed a coalition of religious leaders of the 1960s to confront racism in the churches and synagogues, we need a modern day Conference on Racial Reconciliation to be held over a series of days in major cities across this country. Possible organizers should be prominent tele-evangelists such as Rick Warren, Dr. James J. Zogby, Joel Osteen, T.D. Jakes, Fred Price, Franklin Graham, Kenneth Copeland, Rabbi Michael Lerner, Dr. Cornel West, Joyce Meyer, and Dr. Charles Stanley to name a few.

Where is that kind of fervor today among the people of faith in the face of the challenges when you have bigots going into houses of worship shooting up people? Do we have any men and women of faith who are willing to stand up against the evils of racism and the non-Christian symbols of the Confederate Flag?

Our hard challenge and opportunity are to bear witness to the spirit of God and reclaim from the hypocrites who sit in these religious houses, and fashion a truly Christian world where all religions are respected; and where we place no preference for one religion in particular. If we can find such men and women and we ourselves accept the challenge with devotion and valor, then the bell of history will toll for the Confederate Flag and its systems of racism – and we will make this country fulfill the Hebrew prophet, Amos, prophetic reading come to pass: “Let judgement roll down as waters, and righteousness as a mighty stream.”