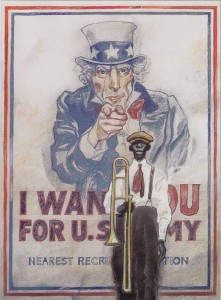 LA JOLLA–A group of valiant African American World War I soldiers—often referred to as the “Harlem Hellfighters”—brought with them to Europe one of America’s most enduring exports: jazz.

The 19th annual Lytle Scholarship Concert at UC San Diego will take a trip through time and pay homage to those brave men with the concert entitled, “Harlem Hellfighters: Jazz Goes to War.” The concert will take place April 19 at 3 p.m. in the Conrad Prebys Concert Hall. All proceeds from the event will benefit undergraduate scholarships at UC San Diego.

“Jazz may have originated in New Orleans,” said Department of Music Professor Emeritus Cecil Lytle, “but it grew up around the world. The music of this concert is the story of jazz, a story of liberation ‘over there’ and back here.”

Jazz made its path across the Atlantic Ocean in 1918, when one black officer, Lieutenant James Reese Europe, volunteered for military service with members of his Harlem Society Orchestra. They formed the 369th Regimental Band, which, in addition to fighting bravely, brought jazz to Paris and popularized it in several European cities.

While members of the 369th Regimental Band fought courageously and were renowned for boosting morale with their music, the U.S. Army still did not allow them to fight alongside white soldiers. As a result, the African American soldiers were attached to the French, who welcomed the soldiers and gave them the moniker, “hellfighters.” The French also awarded the regiment with the prestigious Croix de Guerre, which is given to signify extraordinary valor.

“Not only did the Harlem Hellfighters fight for their country when they did not have equal rights at home, but they brought jazz to Paris and soon united generations of people around the world—young and old, rich and poor, black and white, friends and foes—in what would become the rhythm of the 20th century,” said Lytle.

As part of the April 19 concert, local jazz musicians will play alongside Lytle, who is an internationally renowned pianist, performing many of the works played by the “Hellfighters” nearly a century ago in Paris. The evening will also include brief narration to describe the music and its place in history.

All proceeds from the annual Lytle Scholarship Concert benefit scholarships for graduates of The Preuss School UCSD who are attending Thurgood Marshall College at UC San Diego. The endowed scholarship has helped many students, like Jasmine Varela Mares, a first-generation college student from a low-income background who hopes to make an impact in the public health industry. Mares’ scholarship has allowed her to focus on her studies and discovering her passion—rather than worrying about covering her bills.

“As a result of this scholarship, I don’t need to stress about paying for my education, but instead I have the ability to actually think about what I want to become that would leave a lasting impact on my community,” said Mares. “Thank you for making my life at UC San Diego much easier.”

Tickets to “Harlem Hellfighters: Jazz Goes to War” are $50 for the general public, $40 for active and former military members and $10 for students with a valid school ID.

Visit rels.ucsd.edu to purchase tickets, or to make a gift to the Lytle Scholarship if you are unable to attend, but still wish to make a difference in the lives of UC San Diego students.