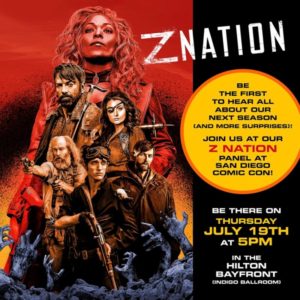 SAN DIEGO–Be the first to witness a whole new evolution in zombie-kind as the cast and creators of SYFY’s hit series, Z Nation reveal exclusive details about what they have planned for the 5th season.

At the end of the panel, the series’ creators will give San Diego Comic fans the opportunity to hear new announcements.

The panel will be held July 19 from 5 to 5:50 p.m. at the Indigo Ballroom at Hilton Bayfront in downtown San Diego.