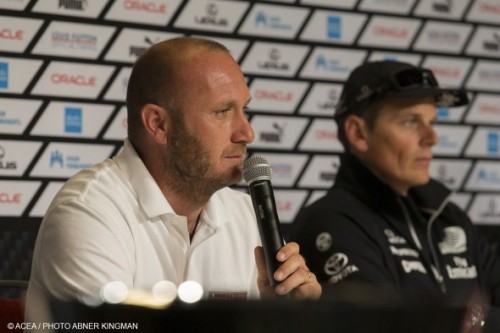 “This isn’t unexpected, but it’s still disappointing,” said Stephen Barclay, the CEO of the America’s Cup. “It’s a case of won’t race, not can’t race.

“The people really hurt by this are the fans, who have waited for more than two years to see the first race in these spectacular AC72 catamarans.

“This is particularly disappointing considering Luna Rossa was out sailing on the race course on Saturday,” said Barclay.

The Luna Rossa statement reads: “As already informally stated in the last few days, Luna Rossa is waiting for the International Jury decision on its protest against the measures introduced by the Regatta Director.”

“What I don’t understand is they sailed today (Saturday), they say they will sail if they win or lose the protest, but they just won’t sail against Emirates Team New Zealand on Sunday,” Barclay said.

Emirates Team New Zealand will need to start the race on Sunday at 12:15 pm PT and sail the course to collect the first point in the Louis Vuitton Cup.

At Friday’s press conference, Kiwi skipper Dean Barker confirmed his team “will be out there, ready to race.”