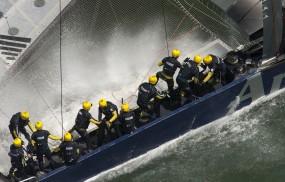 SAN FRANCISCO–Italy’s Luna Rossa Challenge overcame a spirited challenge from Artemis Racing and the threat of the film on its wing sail blowing out to win Semifinal Race 1 of the Louis Vuitton Cup, the America’s Cup Challenger Series.

Skipper Max Sirena and the Luna Rossa crew won the 15.83-nautical-mile race by 2 minutes in winds that averaged 16 knots. But the crew had trouble before the start when the plastic film on the wing, known as Clysar, started peeling off the frames to which it is glued. Bowman Nick Hutton fixed the issue with some tape, but the team was wary of the situation all day.

“Obviously, we’re happy to have the point, but I’m not happy with what happened to the wing because it’s something we should avoid at this level,” said Sirena. “But it’s been a good day for us. I think we took some pressure off of us and for sure tomorrow we’ll sail better than today. Touch wood, we’ll have no problems.”

Today’s race pitted the experience of Luna Rossa versus the comeback story of Artemis Racing. The Swedish team suffered a devastating setback in May when the team’s first yacht capsized and broke apart. Crewman Andrew Simpson of England perished in the accident.

Since then Artemis Racing has been rebuilding its team and its second AC72, dubbed “Big Blue” for its striking navy blue hulls. Today was the team’s ninth day in the new wing sail catamaran, as opposed to the 80th day of practice or racing for Luna Rossa in its chrome-plated speedster.

Showing few signs of nerves, Artemis Racing helmsman Nathan Outteridge won the start of the race and led around the first mark, eliciting a loud round of applause from team supporters around San Francisco Bay.

“We’re really, really pumped in Artemis Racing and super proud,” said skipper Iain Percy. “To think that one week after launching we’d be sailing around the racecourse in 20 knots is beyond my wildest imagination. All the team support boats came over after the race and were cheering and clapping.”

Soon after the mark rounding the Swedish team jibed to port and its lack of practice time showed. The team’s AC72 came off its hydrofoils and slowed dramatically. Luna Rossa passed the Swedes’ transom and jibed to port, staying on its foils.

“As we knew, the difference between the boats is downspeed downwind and in maneuvers,” Percy said. “We suffer from a legacy of our boat not originally being foiling. The rudder positions and size and the size of the rudder elevators makes jibing harder, but we’ll improve our jibes. When we’re up and running and trucking I think we’re fine. It’s literally those transitions, and practice will help.”

Now into the lead, Luna Rossa helmsman Chris Draper put the hammer down. The Italian crew sailed lower and faster towards the next mark than its rival, and opened a 30-second lead at the mark rounding.

Artemis Racing fought back on the next leg, upwind, and reduced its deficit by 9 seconds at the third mark rounding. But Luna Rossa was significantly faster on all three downwind legs.

On the second downwind leg the Italian AC72 was an average of 4 knots faster. Much of that speed advantage seemed to come from the Italians pulling off jibes where they didn’t come off the hydrofoils.

“We’re feeling good as a team. We haven’t come here to mess around,” said Draper. “It’s been hard the past month and today showed we have some skills and have been working hard. I don’t’ think we sailed our best race, but we sailed a nice race and ‘Checco’ (tactician Francesco Bruni) did a nice job up the first beat. We had some issues and can sail a more refined race, and that’s what we’ll do tomorrow.”