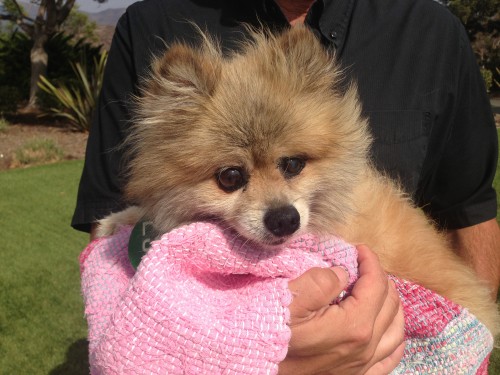 Koda heads home to his family in Arkansas.

BONITA–How did a little Pomeranian get all the way from Rogers, Arkansas to Bonita more than 1,300 miles away?

A Good Samaritan found the nine-pound dog on Beyer Way in San Diego and brought him to County Animal Services in Bonita on August 6. Staff members there found the pooch had been microchipped and they called the owner of the missing dog. Stephanie Roberts and her two young children were ecstatic to hear their pet had been found. The dog owner had been putting up signs throughout her community for the past two months to no avail.

What happened since the Pomeranian went missing and when he was found will probably always remain a mystery. The secret to cracking the case of his owner’s identity was all in the microchip.

Stories of pets such as Koda being reunited with their owners prove that having your animal microchipped is truly your pet’s ticket home,” said County Animal Services Director Dawn Danielson.

Animal Services is taking Koda to the airport tomorrow for his 9 a.m. flight home to his family. The cost of the airfare will be covered by the Foundation for the Care of Indigent Animals.