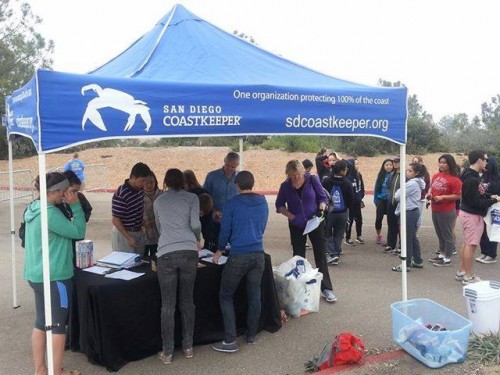 More than 200 participants joined the on-the-water effort by boat, kayak and paddleboard, as well as by foot for the shoreline cleanup around Marie Starns Park. In total, volunteers removed 561 pounds – over a quarter ton – of trash from Mission Bay in three hours, including a sailboat rudder, a twenty-two pound rusted metal pipe, a shopping cart, 454 plastic bags, 563 plastic food wrappers and 1,499 cigarette butts.

Saturday’s event also included a celebration at the park to honor volunteers, a taco bar provided by Rubio’s and prizes from SeaWorld to volunteers who removed the most unusual item, the most cigarette butts, the most trash and the group with the best team spirit.

“All the hard work really does pay off,” said Austyn, a Boy Scout in Pack 685, which came out for the cleanup. “This was a great life lessons for our kids,” remarked Pack leader David Dastrup.

Volunteers at last year’s inaugural event cleared about 450 pounds of trash in one day, a large portion of which was firework debris. As a result, SeaWorld added additional days of water and beach sweeps to its already extensive post-firework cleanup program in the bay.

Trash collected at this year’s Mission Possible: Clean the Bay Day was more than half of all the debris Coastkeeper volunteers collected from Mission Bay and Mission Beach cleanups in 2012. Of the 1,000 pounds of debris removed last year, most were buoyant items, including plastic foam and plastic particles, bags, wrappers and straws that impair water quality and degrade coastal habitats and harm wildlife through entanglement or ingestion.  While volunteers collected these items on the shoreline, the presence of debris extends into the water as well.  Sitting at the base of the San Diego Watershed, water from inland creeks, streams, rivers, and rain events flows into Mission Bay on its way to the Pacific Ocean.  Water transports trash left on the ground or accidentally blown out of trash bins through our watershed into our coastal waters.

SeaWorld’s Rescue Team sees first-hand the effects of marine debris because they care for animals that become entangled or ingest the items.  Every year, SeaWorld rescues an average of 150 marine mammals, many of them affected by debris or pollution, such as fishing line and gear, oil spills and general debris such as plastic bags and other trash items.  Debris also affects sea birds, especially pelicans.  In 2013 so far, SeaWorld has rescued and cared for more than 400 marine mammals and hundreds of brown pelicans and other marine birds, many of which were injured or ill because of marine debris.