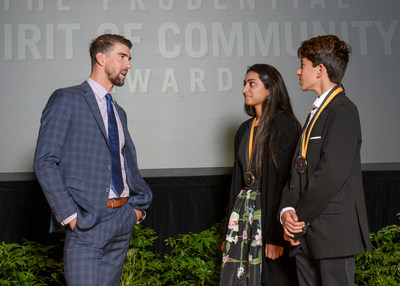 WASHINGTON–(PRNewswire)– Meghana Reddy, 18, of La Mesa and Kenan Pala, 13, of San Diego were named two of America’s top 10 youth volunteers of 2017 by The Prudential Spirit of Community Awards during the program’s 22nd annual national award ceremony at the Andrew W. Mellon Auditorium.

Selected from a field of more than 31,000 youth volunteers from across the country, the two students have each earned the title of National Honoree, along with personal awards of $5,000, engraved gold medallions, crystal trophies for their schools, and $5,000 grants from The Prudential Foundation for nonprofit charitable organizations of their choice.

Reddy and Pala were named California’s top youth volunteers in February, and were officially recognized last night at the Smithsonian’s National Museum of Natural History along with the top two youth volunteers in each other state and the District of Columbia. At that event, each of the 102 State Honorees for 2017 received $1,000 awards as well as personal congratulations from Olympic gold medalist Michael Phelps. The honorees each also received engraved silver medallions and all-expense-paid trips with a parent to Washington, D.C., for this week’s recognition events.

Reddy, a senior at Francis Parker School in San Diego, uses 3D printing technology to produce artificial hands for children and adults in several countries who cannot afford commercial prostheses. On a family trip to India in 2014, she visited an orphanage and was shocked to see two young children there with missing limbs. “I was moved to do something to help them,” she said. Upon returning home, she did some research online and learned how 3D printers can be used to create inexpensive objects, including prostheses.

She acquired a 3D printer and began experimenting with it. Working with a local computer workshop and engineering software, she figured out how to make custom prosthetic hands tailored to the needs and preferences of individual recipients. It takes about 20 hours for her to “print” a hand in pieces, which are then assembled with screws and cords to enable opening and closing movements. Each hand costs about $30 to make, far less than the thousands of dollars a commercial prosthesis can cost. Initially, she provided new hands to local amputees, but then began working with foreign charities as well to provide prostheses in India and other countries. More than 100 hands have been delivered so far. To meet the demand, she established a nonprofit organization called “Limbs of Love,” set up a website to seek donations, assembled an advisory board of doctors and academicians, and recruited students from several high schools to help. In addition, she has started clubs in several schools to engage more students in her mission.

Pala, a seventh-grader at Francis Parker Middle School, launched an initiative to benefit homeless people by raising money for local shelters, coordinating meals each quarter at shelter kitchens, and organizing a record-setting cereal donation event. He has been volunteering for a variety of homeless causes since kindergarten. But a day at the beach spurred him to ramp up his commitment. On the shore, he saw a crowd of people gathered around a sick baby seal, trying to figure out how to save its life. Then, on the car ride home, Pala saw a homeless man begging for help – and people just walked on by. “I sat in the car thinking about why a sick baby seal was surrounded by concerned citizens while a hungry homeless man was receiving no help,” he said.

Soon after, Pala started his “Food4Homeless” program, which over the past few years has been instrumental in providing more than $5,000 in monetary donations to homeless shelters in San Diego. The program also has served meals to more than 2,000 homeless individuals at local soup kitchens. Last year, he led fellow students at his school in collecting nearly 4,000 boxes of cereal to create the world’s largest cardboard-box mosaic on the school’s gymnasium floor, setting an official Guinness World’s Record. All of the boxes – plus an additional 2,000 – were then donated to the Interfaith Community Shelter.

The Prudential Spirit of Community Awards is a national youth recognition program sponsored by Prudential Financial in partnership with the National Association of Secondary School Principals (NASSP).

“These honorees have done exemplary work to contribute to the health and vitality of their communities, and we look forward to seeing the great things they achieve in the future,” said John Strangfeld, chairman and CEO of Prudential Financial, Inc. “Congratulations to each of these extraordinary young volunteers.”

“It’s a privilege to celebrate these students not only for outstanding volunteer service, but for the example they’ve set for their peers,” said Jayne Ellspermann, president of NASSP. “These honorees prove that one person truly can make a difference.”

In addition to Reddy and Pala, these are the other 2017 National Honorees:

Amal Bhatnagar, 18, of Duluth, Ga., a senior at Northview High School, created a student organization that has provided more than a thousand first-aid kits to people in the U.S. and overseas who lack access to basic healthcare.

Riley Callen, 14, of Pawlet, Vt., an eighth-grader at Dorset Elementary School, founded an annual “hike-a-thon” in the hills of Vermont that has raised more than $250,000 to help find a cure for brain tumors, like the ones that have affected her since she was 8 years old.

Ariana DeMattei, 16, of Center Moriches, N.Y., a junior at Westhampton Beach High School, has raised over $100,000 to provide more than 1,000 new backpacks filled with school supplies for local elementary students through an organization she founded in 2012 called “Backpacks for Fellow Students.”

Sarah (Katie) Eder, 17, of Shorewood, Wis., a junior at Shorewood High School, developed a creative writing workshop for children in need that is now being taught by 120 teens in seven states and five other countries.

Bradley Ferguson, 16, of Northfield, N.J., a sophomore at Mainland Regional High School, started a service-learning club that over the past three years has supported veterans and people in need by refurbishing an American Legion post, collecting food for a community food bank, making lunches for homeless people, and growing fresh produce at several community gardens.

Harmonie Frederick, 11, of Columbia, S.C., a fifth-grader at Polo Road Elementary School, sold lemonade to raise money and awareness to fight cancer, conducted a coat drive to keep those less fortunate warm in the winter, and volunteers at a local nursing home.

Lorelei McIntyre-Brewer, 11, of Duncannon, Pa., a sixth-grader at The Cove School, built a volunteer network that has provided more than 12,000 special pillows for children around the world undergoing heart surgery.

Kelsey Norris, 13, of Bonaire, Ga., a sixth-grader at Bonaire Middle School, overcame a challenging start in life to provide more than 1,000 volunteer hours and raise more than $20,000 for a wide variety of causes aiding children and others in difficult situations.

The distinguished selection committee that chose the National Honorees was chaired by Strangfeld and included Ellspermann of NASSP; Andrea Bastiani Archibald, chief girl expert for Girl Scouts of the USA; Kristofer Bolz with the national headquarters volunteer services team at the American Red Cross; Tracy Hoover, president of Points of Light; Peggy McLeod, deputy vice president of education and workforce development at the National Council of La Raza; Frederick J. Riley, national director of urban and youth development at YMCA of the USA; Linda Shiller, at-large member on the National PTA Board of Directors; Rhonda Taylor, acting deputy director of strategic communications and director of partnerships and program engagement for the Corporation for National and Community Service; Dru Tomlin, director of middle level services for the Association for Middle Level Education; and two 2016 National Honorees: Connor Archer, a freshman at Husson University in Bangor, Maine, and Alisha Zhao, a senior at Lincoln High School in Portland, Ore.

The Prudential Spirit of Community Awards program was created in 1995 to identify and recognize young people for outstanding volunteer service – and, in so doing, inspire others to volunteer, too. In the past 22 years, the program has honored more than 120,000 young volunteers at the local, state and national level.