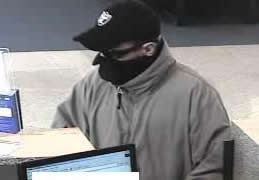 Authorities are seeking the identity of this bank robber.

NORTH COUNTY–The FBI, Oceanside police and Sheriff’s Department are seeking the public’s assistance to identify a serial bank robber dubbed the “Drywaller Bandit” believed to be responsible for robbing eight banks in Encinitas and Oceanside since September 24, 2010.

The latest robbery in this series occurred on Tuesday, January 25 at approximately 9:28 a.m., at the US Bank, 4132 Oceanside Blvd. in Oceanside. During this robbery, the robber walked directly to the teller counter, pointed a handgun at the teller, and demanded money. After receiving a sum of money, he walked out of the bank. He was last seen crossing Oceanside Blvd. in the direction of a shopping mall just south of the bank.

There is a $20,000 reward being offered for information leading to the arrest and conviction of the “Drywaller Bandit.”