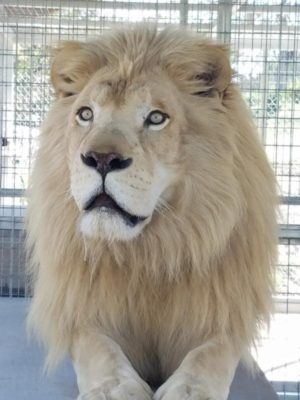 Louis the lion at his new home at Lions, Tigers and Bears in Alpine. Photo: LTB

The lions, 12-year-old Lufuno (Louie), and 14-year-old sisters, Arusha and Zulu were transported April 5 from Los Angeles to the sanctuary, according to Bobbi Brink, founder of Lions, Tigers and Bears.

The lions were put in quarantine where they will receive physicals and have blood and other lab samples taken, Brink says.

The three lions performed in many live shows for a circus. With more restrictive laws being placed on the animal entertainment industry, many animals formerly used for entertainment like Louie, Zulu, and Arusha are in need of new homes.

“Although these animals were well-cared for by their previous owner, it is standard for all animals arriving at LTB to be placed in quarantine and will ensure the lions have no medical concerns that need to be addressed,” Brink said.

Lions, Tigers and Bears staff are working on building temporary runs for the lions while they continue to raise the funds for the fencing necessary to complete their habitat.

Brink says white lions like Louie are genetically rare and are unique to the Timbavati area of South Africa. Despite their name, white lions are not albino. There are only a few hundred white lions in captivity and less than 13 in their natural habitat in the wild. Louie is the first and only white lion to come to the San Diego area.

In addition to the cost of completing their new habitat, it will cost Lions, Tigers and Bears about $10,000 per year per lion to provide basic care: food, water, vaccines, and flea control. This is not including major medical expenses and the ongoing cost of maintaining their habitat once it is completed.

Lions Tigers and Bears depends on donations from the community to care for its animals at the sanctuary.

To donate, to Lions, Tigers and Bears, visit https://lionstigersandbears.org/wild-in-the-country-2017/