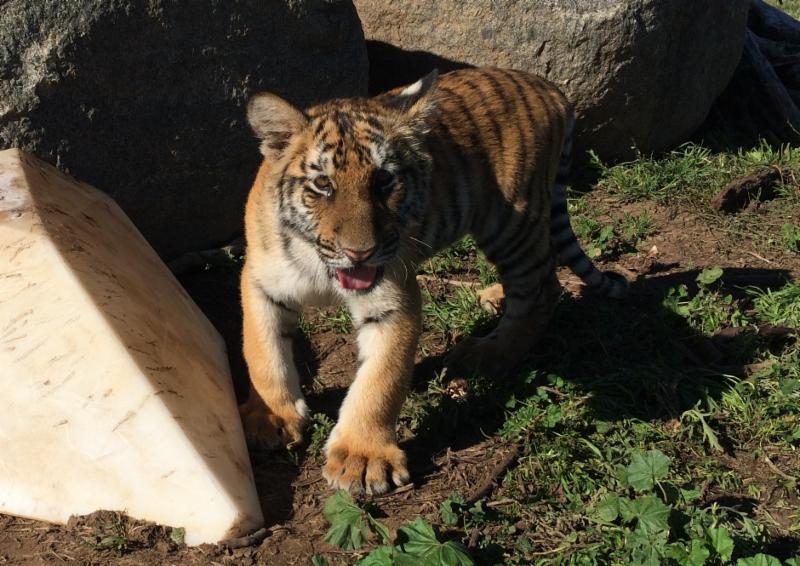 ALPINE–Lions, Tigers and Bears’ tiger club, Himmel, has passed away at the sanctuary.

Bobbi Brink, founder and director of San Diego’s nonprofit accredited sanctuary, said the six-month-old tiger cub underwent a routine veterinary procedure late last week to be neutered and repair his hernia. He was also scheduled for reparative surgery on his declawed paws in February.

The sanctuary’s medical team, led by lead veterinarian, Dr. Jane Meier, who has over 40 years of experience, performed the procedure and used the opportunity to give the tiger his required vaccinations while under anesthesia.

“Himmel’s surgery went well and was uneventful. As Himmel was transitioning into surgical recovery, he suffered profound respiratory failure and collapse. Despite the best resuscitation efforts of our veterinary team and animal care staff, Himmel did not recover,” Dr. Meier said.

Dr. Meier says the most likely cause of the problem was a severe allergic reaction, anaphylaxis, which occurred in response to one of the injections Himmel was given at the end of his surgery.

“This is the most serious type of allergic reaction and is often fatal. It is the same kind of reaction caused by peanut allergies in people and can happen so quickly and severely that even aggressive treatment is ineffective,” Dr. Meier added.

Himmel arrived at the sanctuary on September 5, malnourished, declawed, and suffering from an umbilical hernia.

“We had concerns that he had other underlying issues, but through attentive care, proper nutrition and an enriching diet, Himmel appeared to be morphing from a frail cub into a young tiger with a playful personality and a full life ahead of him.,” Brink said. “As happy as he was, we knew he still had a hard road ahead of him, with his nutritional issues and pain everyday from cruelly being declawed.”

The sudden loss of Himmel, Brink says, “is a stark reminder of how even after thoughtful and thorough consideration of the benefits and hazards, you can never completely eliminate the risks of a medical procedure. Himmel’s passing is not only a blow to our sanctuary team, but one of the tragic consequences that stem from the indiscriminate captive breeding of exotic animals. With no family history to reference, it is hard to pinpoint an animal like Himmel’s underlying issues.”

The tiger was found roaming the streets of Hemet in early September 2015. He was anonymously turned into an animal shelter, when California Department of Fish and Wildlife stepped in and asked Lions, Tigers and Bears to provide refuge to the then three-month old tiger cub.

Himmel’s name was inspired by the late Larry Himmel, the beloved CBS 8 San Diego newscaster and longtime supporter of the sanctuary, after the name won the most votes on an online naming contest in October.

“Life sometimes is unexplainable and seemingly unfair. With any death, we are always left with so many questions, but in a life cut so short, we often can find no answers that comfort us,” Brink says. “They say God never gives us more then we can handle and when he takes something He always gives back more. Himmel’s passing will continue to fuel our passion to stop the abuse that is the exotic animal trade – so no more cubs are forced to endure the perils that stem from this heinous trade. Himmel may not have been with us for long, but he left boundless paw prints on our hearts that will last forever.”