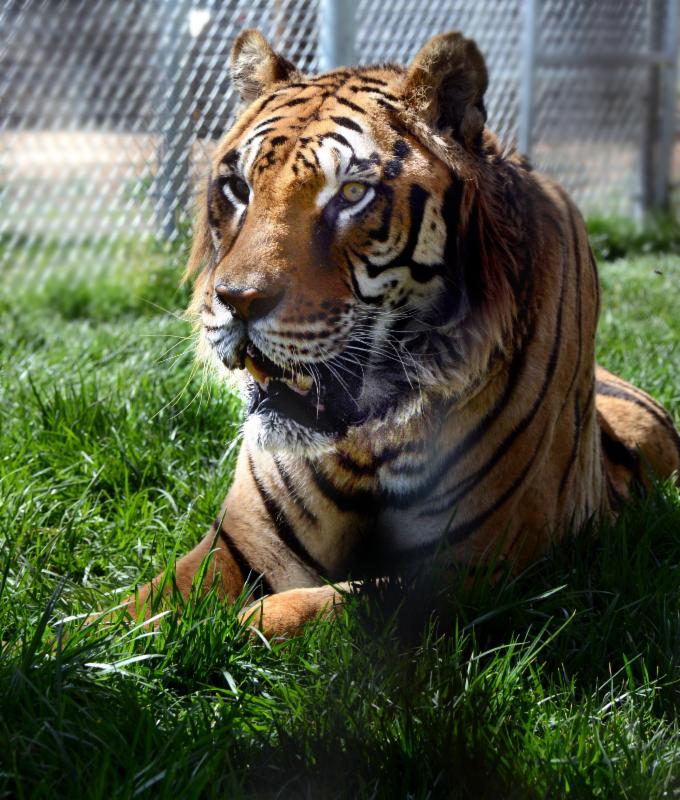 ALPINE–Phevos, a 17 year-old male tiger who was rescued from a failing zoo in Greece last year has died.

“It is with great sadness, that I must share the news about the passing of Phevos. He fought a long and hard battle in this lifetime, and had been through so much. I am honored to have been able to provide him with compassionate care for the time that he was here with us.” states Brink.

“Phevos’ health had been on a slow decline over the last two months. We have been keeping a very watchful eye over him, but he had progressively shown signs of pain and became increasingly withdrawn from his normal interests and activities,” said Dr. Jane Meier, the sanctuary’s lead veterinary. “His appetite had steadily decreased, making our abilities to provide pain medication difficult, since medication was administered through his daily diet. Before his state deteriorated further, the decision was made with a heavy heart and much contemplation, to humanely euthanize our dear friend, Phevos.”

Sanctuary officials describe the feline as “a tiger that truly defied all odds thrown his way.”

Born in captivity, Phevos travelled around with an Italian touring circus group until he was seized by Greek authorities in 2002, along with his mate Athena, and five other tigers. The pair  were sent to the Trikala Zoo, outside of Athens, Greece where they lived together until March 2014. Due to the surge of the economic crisis in Greece, the conditions of the zoo deteriorated over time. Neither tiger received necessary care, and signs of abuse were apparent. Athena passed away due to medical neglect in March 2014, after a gaping wound in her paw caused by a Christmas ornament, went untreated for over a year.

David Barnes, a UK citizen who initially helped place the two tigers at the Trikala Zoo , and who first brought the plight of Phevos to LTB’s attention, helped to arrange the monumental rescue that would provide this suffering  tiger a second chance.  Eight months after Athena’s death, Phevos was rescued from the Trikala Zoo and brought to LTB, where he would live out the remainder of his life.

Phevos’ rescue made international headlines, as he was “the tiger that travelled halfway across the world for a better life.” LTB keepers and staff made every effort to provide the 300 pound tiger with specialized care and a better life at the sanctuary. He was described as a gentle giant, with a calm and reserved demeanor.

Phevos enjoyed sunning himself in the cool grass, lounging in the shallows of his pool, and taking naps in his beds of hay. He grew fond of the sanctuary’s two year old male tiger, Maverick, as the pair enjoyed spending time together through their habitat fences.

“Phevos’ passing is heartbreaking to our keepers, staff, volunteers and members, all of whom played a special role in helping provide this beautiful animal with a better life.”

A memorial will be held at the sanctuary on October 3 after the morning member visit. Members, family and volunteers are invited to pay tribute to Phevos through a celebration of life.