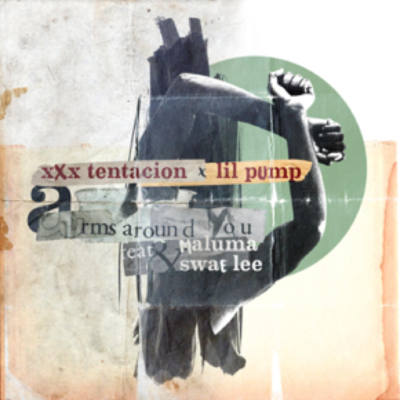 LOS ANGELES–21st century modern icons transcend generations and genres with the hottest song and most extraordinary collaboration of the year! In a move set to not only break the internet, but break the culture, hip-hop’s youngest multiplatinum-selling superstars XXXTentacion and Lil Pump flex their Latin flavor on the historic new single “Arms Around You,” featuring Maluma and Swae Lee.

“Arms Around You” brings together four of music’s most recognizable voices on one massive record with international implications. Produced by Skrillex, Mally Mall and JonFX, the track weaves effortlessly between Latin, alternative, hip-hop, and pop influences, it culminates on an unforgettable chant sung by X – “Arm’s around you/Te amo mami/ Let me hold you/Wrap my arms all around you…” which is featured in the video https://www.youtube.com/watch?v=BxFvI-zpaRs

The song came to life this summer after the untimely passing of XXXTentacion. As a friend and fellow Florida artist, Lil Pump reached out to XXXTentacion’s mom Cleopatra Bernard in effort to posthumously create a track that would continue the legacy of her son’s status as an innovative force. Together, they carefully assembled “Arms Around You” and worked with collaborators Maluma and Swae Lee.

The result might just be X’s and Pump’s biggest cross-over performance yet.

“Arms Around You” is just the latest milestone for these two 21st century titans. The Florida rappers continue their domination of music consumption worldwide by putting up undeniable numbers, breaking records, and garnering industry recognition and awards. Because of these two artists, the Florida music scene has broken barriers and effectively taken over everywhere.

Recently, Lil Pump achieved the biggest-ever global debut for a hip-hop video on YouTube for “I Love It”—his collaboration with Kanye West. After surpassing 76 million views in under a week, it eclipsed 270 million global views to date. The groundbreaking video – co-directed by West and executive-produced by Spike Jonze – went viral, spawning an #ILoveItChallenge on social media, memes from celebrities like Ellen Degeneres, and a hilarious spoof from The Late Late Show’s James Corden. Meanwhile, its total streams surpass 197 million thus far. Lil Pump maintained that momentum by dropping another banger entitled “Multi-Millionaire” [feat. Lil Uzi Vert] and brought down the house by opening up the BET Hip-Hop Awards with a medley performance of his biggest hits, including the smash “Gucci Gang Remix” joined by none other than the legendary Gucci Mane. What’s more, Billboard touted him on its coveted “21 Under 21” feature.

In 2018, the BET Hip Hop Awards crowned him “Best New Hip Hop Artist” as 17 earned “Favorite Album – Soul/R&B” at the American Music Awards. He can count Kendrick Lamar, Kanye West, Nicki Minaj, Camila Cabello, and Academy Award winner Jamie Foxx amongst his supporters and admirers as well. His influence and impact only continue to grow.