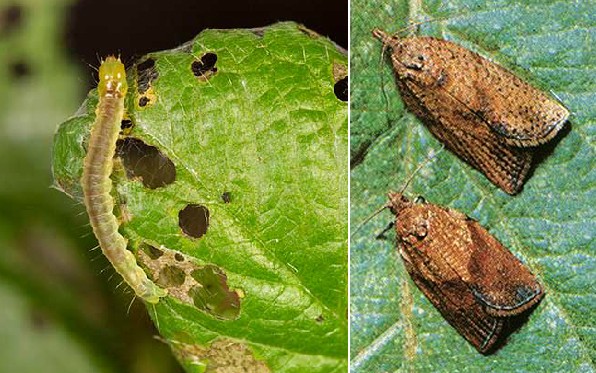 SAN DIEGO–Portions of land in and around Oceanside were added to California’s Light Brown Apple Moth quarantine this week after inspections turned up four apple moths.

California’s “interior” quarantine has grown to 6,000 acres in 19 counties across the state for the apple moth, a destructive agricultural pest that eats and damages more than 250 types of crops.

The County of San Diego’s Department of Agriculture, Weights and Measures has scheduled two meetings to talk to local growers about the quarantine this week: from 10 a.m. to 11:30 a.m. on May 23 at the San Marcos Community Center at 3 Civic Center Drive in San Marcos; and from 1 p.m. to 2:30 p.m. on May 24, at the Fallbrook Community Center Auditorium at 341 Heald Lane in Fallbrook. Officials from the California Department of Food and Agriculture and the United States Department of Agriculture will be at the meetings and available to answer questions.

Quarantines, which are set by the state and federal government, generally mean that plant material — plants, fruit, flowers, produce — cannot be moved from the quarantined areas unless they have been certified as pest-free by agricultural officials; are purchased at a retail outlet or are “passing through” the area in accord with local safeguards. Federal restrictions also apply to commodities being shipped outside the state.

The 18-square-mile area in and around the city of Oceanside that has been quarantined stretches from Camp Pendleton on the north side, Sleeping Indian Road on the east, State Route 76 on the south and Oceanside Municipal Airport on the west.

The Light Brown Apple Moth is native to Australia and feeds on more than 2,000 plants and at least 250 types of crops, from apples, blueberries, peaches, pears, strawberries, grapes, citrus, and vegetables including cabbage, corn, pepper and tomatoes. It also found on trees including oaks, willows, poplars, walnuts, and ornamental plants including roses, chrysanthemums and dalias.

The apple moth caterpillar damages plants by feeding on its leaves, buds, shoots and fruit.

The state issued an apple moth quarantine in San Diego County in 2010 after four moths were discovered in Balboa Park.