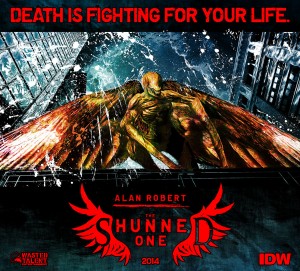 SAN DIEGO–Life of Agony bassist/songwriter Alan Robert teams up with award-winning publisher IDW Publishing once again to release another creator-owned horror comic miniseries The Shunned One in 2014.

Robert’supcoming tale of winged woe focuses on an Angel of Death who goes rogue after being ordered to take several innocent lives. This guilt-ridden death angel begins to carry out his own judgment on humans, based on their actions instead of whether their names appear on the preordained Death List. The Angel’s unsanctioned murders instantly alter the balance within the universe and trigger a string of unforeseen disasters that spiral out of control. Banished from Heaven by his Creator and hunted by a pack of vengeful death angels, The Shunned One must hide among the humans to survive while trying to reverse the damage he’s done.

The Shunned One marks the prolific creator’s fourth horror comic series with IDW in four years; following his other critically acclaimed series Killogy, Crawl to Me, and Wire Hangers.

“This will definitely be my darkest series to date,” says Robert. “The tragedies in Newtown and Aurora really hit home for me. I can’t even begin to imagine the pain those families are going through. I suppose The Shunned One is my subconscious reaction to events like that—just trying to cope with all this death and my worst fears in my own way.”

“I’m happy to once again put my life in Alan Robert’s hands in the form of his latest series for IDW,” said Chris Ryall, IDW’s Chief Creative Office/Editor-in-Chief. “As he’s proven with his numerous series for us already, he’s an expert at telling dark, fantastical tales, and The Shunned One, featuring the Angel of Death himself, is only the latest reason we’re happy to keep walking into dark territory with him.”

Alan Robert is best known for being the primary songwriter and bassist for the respected hard-rock group Life of Agony for over two decades. LOA recorded several studio albums for Epic/Sony and Roadrunner Records, developing a cult following in the process. The band has shared the stage with the biggest names in rock, including Metallica, Black Sabbath, and The Red Hot Chili Peppers. The group went on to headline to audiences as large as 500,000 in Europe.