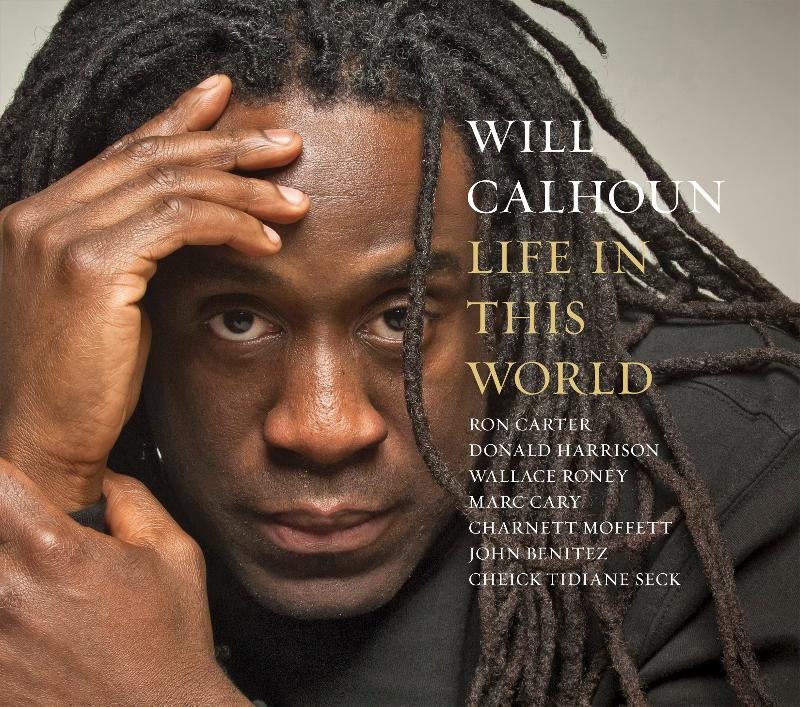 NEW YORK, NY – Max Roach has been credited with breaking down more barriers than any other drummer in the history of jazz. The body of work produced by Roach is virtually unmatched, and he has deservedly earned his place among the all-time great icons of modern drumming. Drummer Will Calhoun’s May 14, 2013 release, Life in This World CD under the Motéma Music label, has Calhoun following the traditions and spirit of Max Roach and Art Blakey with solos that are virtual masterpieces of melodic and rhythmic inventiveness contoured in a most imaginative manner.

Calhoun has always been a fabulous musician. It has been written countless times that Calhoun’s drumming incorporate various stylistic influences and various augmenting technologies. As the leading drummer/musician for the rock/heavy metal group Living Colour, he was one of the first drummers to blend advanced funk and fusion techniques with elements of hard rock and thrash metal.

Jazz was the first music that Calhoun heard while growing up – “Before rock, before hip-hop, before funk,” he recalls. “In my family, African-American history was very important, whether it was Muhammad Ali or Jim Brown, Coltrane, Miles, Duke Ellington – It wasn’t just listening to the music in my house, the life styles of these men and other women were laid down as history lessons on the music and culture.”

Living in the Bronx, however, it wasn’t long before Calhoun was exposed to myriad styles and cultures, from rock and funk to the burgeoning style of hip-hop. It actually came as a shock to the young drummer when he discovered that for most people genres were defined by hard boundaries – a lesson he learned first at Berklee College of Music and later while on the road with Living Colour.

Life In This World is a continuation of Calhoun’s musical journey in which he has the opportunity to share with the music world his life experiences up to this point. You can hear Calhoun presiding over the ensemble as he executes a fiery break as in the Brother’s Will track, a spur soloists with deft explosions in the King Tut Strut track. All in all, Calhoun is in many ways like Art Blakey, an instinctive and emphatic drummer who is always musical.

In 2005, Calhoun created Native Lands, a multi-media fusion of jazz and world music with ambient electronica and another passion, photography. Life In This World is Calhoun’s most jazz-oriented recording since his GRAMMY® nominated 2000 release, Live at the Blue Note, but those diverse interests remain evident.

When you listen to Calhoun and his ensemble of dynamic musicians at work on this CD, you will discover that he has an impeccable sense of dynamics and drama. This musical effect is made possible by Calhoun hooking up with jazz greats including Wallace Roney (trumpet), Donald Harrison (alto sax), Charnett Moffett (acoustic and electric bass), Marc Cary (piano and keyboards), Doug Wimbish (ambient bass, chordal bass swirls), John Benitez (acoustic bass) and legendary bassist Ron Carter.

Jazz family and world music fans, Will Calhoun is one cat who can play some drums! When you listen to the John Coltrane classic performed on this CD, you have to shake your head and thank Calhoun for sticking close to Coltrane’s original melodies with slight variations. Naima is a ballad composed by John Coltrane in 1959, and named after his then-wife, Juanita Naima Grubbs. It first appeared on the album Giant Steps, and is notable for its use of a variety of rich chords over a bass pedal. It is mainly made up of a slow, restrained melody, though there is also a brief piano solo.

Calhoun’s version of Naima has him playing the cajon and water drum to give that deep and engrossing African flavor. Calhoun’s tenure with Living Colour afforded him the opportunity to travel to Africa for stays that lasted from six to eight months at a time, which propel him to focus his furious, expansive solos, and his stamina and underlying sense of harmonic adventure. Donald Harrison’s alto sax distinguished his marathon solos which are offset by interludes of subtle, concise lyricism, embodied here in the tender Naima.

Life In This World is heavily accentuated with Afro-Cuban beats which Calhoun is more than aptly ready to fire off. Calhoun possesses an explosive, hard-swinging style, heavily injected with West African influences similar to the style of the late Art Blakey.

The 48 year-old Calhoun has done something that is quite remarkable in the jazz world. He has managed to listen and learn from the spirits of the jazz giants of the past and present and incorporated the one element that unites them all – liberty. Life In This World is Will Calhoun’s testament of musical genius and liberation, often with a perversely proud intransigence, merging with everything and borrowing anything, yet ultimately riding alone with a style uniquely Will Calhoun.