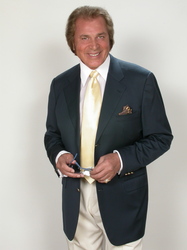 LOS ANGELES–(PRWeb)–Legendary singer Engelbert Humperdinck, known as the King of Romance, is tossing his hat in the ring to be the next “American Idol”  judge. The two-time Grammy nominee with multiple platinum and gold records to his credit has sold over 150 million units over the course of his 44 year career. He has a global following which includes 250 fan clubs and millions of devotees of all ages.

Humperdinck is presently on his Legacy of Love tour which takes him to venues, arenas, and casinos throughout the world, and he regularly fills the house with fans of all ages.

“He incorporates so much more than music in his stage shows, and he is intimately involved with the staging of the show, the arrangement of the musical numbers, the roles of the accompanying instruments in his band, the lighting, the sound, the musicality of the shows, and all facets of what it takes to launch and execute his concerts,” stated Vicki Roberts of Kismet Talent Agency, which represents Humperdinck. “That, along with his legendary status, is why he is the perfect candidate for the position of judge on American Idol,” she noted.

“The flexibility of his schedule will allow him to accommodate the schedule demands of the show and I can think of no better music legend to step into the position of judge and lend his expertise to the American Idol phenomenon,” stated Arthur Andelson, co-founder of Kismet Talent Agency. “He regularly mentors up and coming young artists at his home recording studio and around the world, so this would be a natural progression for him and a perfect choice for the show,” Andelson added.

Engelbert Humperdinck is an eclectic and dynamic icon. He’s hot, he’s current, and he has an amazing ability to engage the entire demographic spectrum, and he would be a delightful, unexpected, and unique addition to American Idol. Simon Fuller, are you listening?