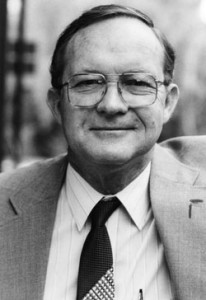 Johnson was a faculty member at UC Berkeley from 1962 to 1988, when he joined UC San Diego as a professor at IR/PS. With newly appointed Professor Masao Miyohsi in the Department of Literature and John Dower in the History Department, Johnson helped develop UC San Diego’s Japanese Studies program.

Johnson was born in 1931 in Phoenix, Ariz. He earned a bachelor’s degree in economics in 1953 from UC Berkeley and a master’s degree and in political science from Berkeley in 1957 and 1961, respectively. Johnson was as a naval officer in Japan during the Korean War, an experience that led to his lifelong interest in Asia and the Pacific region.

At IR/PS, Johnson was awarded the endowed Rohr Chair in Pacific International Relations. The chair was established to “bring the Pacific Rim communities closer together for the economic and social benefit of all its members.”

“We were honored and pleased that Chalmers Johnson chose to join us here at UC San Diego to help develop our School of International Relations and Pacific Studies,” said Peter Gourevitch, an IR/PS professor and founding dean. “He was world famous and admired for his publications going back several decades on China, Japan, and foreign policy. He was a vigorous teacher, and active commentator on world events.”

As a professor emeritus after he retired in 1992, Johnson continued an active career as author, magazine writer and commentator on U.S.-Asian policy and security issues.

Johnson’s ideas on “state-directed capitalism,” particularly with respect to Japan amount to a key part of his scholarly legacy. After the publication of his book on Japanese political economy, MITI and the Japanese Miracle, Johnson was dubbed “the godfather of the revisionists” on Japan by Newsweek magazine’s Robert Neff.

“Although some had previously discussed the notion that there were different varieties of capitalism, I think Chal was the first I think to link this idea to how an Asian country like Japan grew to be an economic superpower so fast – by having a government whose major goal and priority wasn’t just military strength but economic growth to achieve international power and status,” said Ellis S. Krauss, a professor at IR/PS. “He called this the ‘developmental state.'”

Johnson was an outspoken academic who combined his scholarship with criticism of U.S. foreign and domestic policies that he felt were outdated. Before the 2001 terrorist attacks on New York and Washington, D.C., Johnson wrote the book Blowback: The Costs and Consequences of American Empire.

“Chal was a penetrating, original, and influential scholar, plus a very gifted literary and conversational stylist,” wrote James Fallows, Atlantic Monthly correspondent and expert on Asian politics. “When I first went to Japan nearly 25 years ago, his MITI and the Japanese Miracle was already part of the canon for understanding Asian economic development. Before that, he had made his name as a China scholar; after that, he became more widely known with his books like Blowback, about the perverse effects and strategic unsustainability of America’s global military commitments. Throughout those years he was a mentor to generations of students at the UC campuses at Berkeley and San Diego.”

Many of Johnson’s students at IR/PS went on to careers in government service, non-profit organizations, international companies and other organizations and enterprises.

Johnson was a fellow of the American Academy of Arts and Sciences, a member of the Council on Foreign Relations, and a member of the Japanese-United States Friendship Commission, to which he was appointed by former President Reagan. In addition, he was on the American Advisory Committee for the Japan Foundation and was a member of the Academic Advisory Board of the East Asia Program for the Woodrow Wilson Center at the Smithsonian Institution. Johnson received fellowships from the Ford Foundation, the Social Science Research Council and the Guggenheim Foundation.