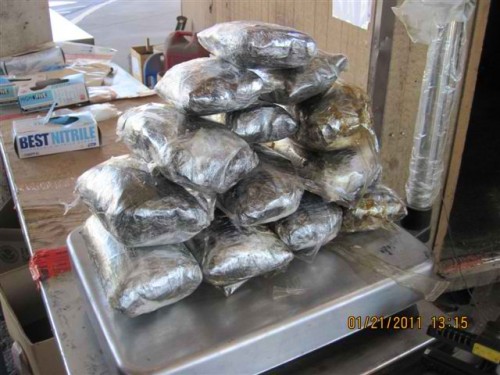 About 200 pounds of meth was seized during Project Delirium. Photo courtesy of DEA

SAN DIEGO–A joint investigation between the District Attorney’s office and the Drug Enforcement Agency targeting a cross-border drug trafficking ring has resulted in the arrest of 23 individuals and the seizure of hundreds of pounds of illegal drugs. The drug trafficking ring, which has direct ties to a violent Mexican drug cartel, was transporting large amounts of methamphetamine and other controlled substances into San Diego County for distribution across the southeastern U.S.

“This is the second time in one week that law enforcement agencies have joined forces to disrupt a major drug trafficking operation with ties to Mexico,” said District Attorney Dumanis. “These latest arrests and our office’s prosecution of these individuals will have a significant impact on the cartel’s ability to operate in San Diego.”

Drugs seized during the operation include more than 200 pounds of meth, nearly 200 pounds of marijuana, one pound of cocaine and three pounds of heroin. The District Attorney’s Office has filed charges against 12 defendants including possession of methamphetamine for sale, transportation of methamphetamine and employing a minor to carry a controlled substance. The defendants were arraigned in San Diego County Superior Court downtown. The U.S. Attorney’s Office is also prosecuting defendants arrested as part of the takedown.

“When you take the arrests made here in San Diego and couple them with the coordinated nationwide effort this week against this violent organization, you see that we have disrupted their whole distribution chain, from the street-seller to the middle man to the leaders of the organization in Mexico,” said Acting Special Agent-in-Charge William R. Sherman of the San Diego Drug Enforcement Administration.

The arrests are part of a larger, national Drug Enforcement Administration takedown dubbed Project Delirium. The 15-month long investigation targeted major Mexican drug trafficking organizations with significant links to La Familia Michoacana, a violent Mexican drug cartel based in Michoacan, Mexico. Across the country, there were more than 1,980 arrests.