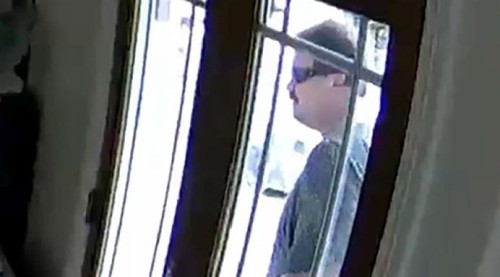 ENCINITAS–Crime Stoppers and Sheriff investigators are asking for assistance from the public to help identify and locate a man wanted in connection with an attempted burglary at a home in Encinitas.

On October 25, surveillance video showed a man trying to burglarize the home of an elderly woman located in the 2400 block of El Camino Del Norte in Encinitas. The man tried to open a door in the home, but the security alarm was activated when he attempted to pry open a window.

The same home was burglarized on May 26 while the homeowner was attending her husband’s funeral. The suspects in that case entered the home and tried to steal a safe, but were unsuccessful.

The man in the most recent burglary attempt is described as a white male adult, between 35 and 45 years-old, stands six feet, two inches tall with a normal build. He has brown, wavy hair, brushed back and a mustache. He was last seen wearing thick, wrap-around sunglasses, a green short-sleeved shirt and khaki cargo pants.

Anyone with information on the identity or location of the suspects is asked to call the Crime Stoppers anonymous tip line at (888) 580‐8477.

Crime Stoppers is offering up to a $1,000 reward to anyone with information that leads to an arrest in this case.  Anonymous email and text messages can be sent via www.sdcrimestoppers.org.