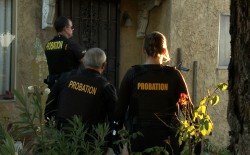 SOUTH BAY–Officers broke down doors when an offender refused to open it for them, chased down a probation violator and arrested 27 high-risk probation violators and “realigned” offenders in the South Bay Wednesday night in an enforcement effort called Operation Southland.

Nearly 120 officers in teams of 10 from seven different agencies targeted offenders from National City to the U.S./Mexico border who had failed to report to probation officers or committed other violations.  Officers did unannounced searches and conducted on-the-spot drug tests. They also hauled in 11 rifles, six handguns, other weapons and narcotics.

“This enforcement was focused on those offenders in the community that posed the greatest risk and were currently in violation of the terms of their supervision,” said Chief Probation Officer Mack Jenkins. “With 60 offenders contacted, 27 arrests made including eight for new crimes, the offenders were clearly held accountable. And taking 17 guns off of the street absolutely serves community safety.”

The offenders’ original crimes ranged from driving under the influence to sex offenses to violent crimes. Some of the violations included being in possession of narcotics, weapons, pornography or gang paraphernalia, being under the influence of alcohol or drugs, contacting a victim despite a restraining order, refusing to submit to a search, elder abuse, and ignoring an order not to be in contact with minors.

The operation’s targets included traditional high-risk probationers and people supervised by the Probation Department under criminal realignment, a set of laws in place since 2011. Under realignment, County Probation Departments are now responsible for supervising some offenders after their release from prison instead of State Parole. Realignment also sent many newly sentenced felons to local jail instead of prison. Some of those offenders are also supervised by Probation when they are released.

Because many of these “realigned” offenders have longer criminal histories and pose a higher risk to public safety than traditional probationers, the Probation Department is forging new partnerships and increasingly working with local and federal law enforcement  to intensely supervise realigned offenders and hold them accountable.

This was the first of its kind large-scale Probation enforcement in the South Bay region where probation officers collaborated with local and federal law enforcement. By involving a large number of officers and partners, the Probation Department was able to serve dozens of warrants in one night that otherwise could have taken weeks.  The beefed up operation also keeps officers safer, and makes all of the agencies more aware of the others’ protocols and investigative techniques.

The operation came just days after another cooperative effort resulted in thearrest of a realigned offender, Carlos Pelham. Probation officers first tried to arrest Pelham on October 30, but he managed to run from them.

Probation worked with the Sheriff’s Department and the Fugitive Task Force to begin surveillance on his home. Pelham was  spotted early Sunday morning, tried to run,  but this time he was caught after a short chase through backyards.

“The result of this coordination among agencies was that the offender was held accountable and community safety was enhanced,” said Chief Probation Officer Mack Jenkins.