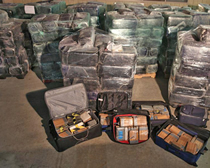 SAN DIEGO–Three suspects are facing possible federal charges following the seizure of more than eight tons of marijuana and several hundred pounds of cocaine linked to an elaborate cross border tunnel shut down Wednesday night during an operation by federal and local law enforcement agencies.

The newly completed tunnel, connecting a warehouse in Tijuana, Mex., with a building in San Diego’s Otay Mesa industrial park, stretches the length of nearly six football fields. The passageway – equipped with lighting, ventilation and an electric rail system – is the largest, most sophisticated tunnel uncovered along the southern border in two years. Investigators say the tunnel’s zigzagging path suggests builders veered off course several times during its construction.

Collectively, the 17,292 pounds of marijuana and 325 pounds of cocaine seized as part of the ongoing tunnel probe have an estimated street value of nearly $12 million. Also of significance, federal authorities say this marks the first time cocaine has been recovered in connection with a drug smuggling tunnel in the San Diego area.

“Once again, we’ve succeeded in taking down a smuggling tunnel before it was fully operational,” said John Sandweg, acting director for U.S. Immigration and Customs Enforcement (ICE). “This action is another huge setback for the Mexican cartels, which invest vast amounts of time and money to build them. These criminal organizations should not mistakenly believe tunnels will be their ticket to success.”

Three suspects arrested Wednesday during the enforcement action are expected to face federal drug charges. The prosecutions are being handled by the U.S. Attorney for the Southern District of California.

“The cartels have spent years and tens of millions of dollars trying in vain to create an underworld of secret passageways to move huge quantities of drugs at will,” said U.S. Attorney Laura Duffy. “We have a message for the builders, financiers and operators of these sophisticated tunnels: if you continue to go underground, you will find your world collapsing around you.”

“This operation is yet another example of the combined efforts by the Department of Homeland Security and our law enforcement partners working together to secure our border against all threats,” said Chief Patrol Agent Paul Beeson with the U.S. Border Patrol San Diego Sector.

“This case demonstrates what can be accomplished when there is the common goal of disrupting transnational criminal organizations,” said Director of Field Operations for CBP in San Diego, Pete Flores. “I’m proud my officers were part of the team to take this tunnel down.”

The initial enforcement action leading up to the shuttering of the tunnel occurred mid-day Saturday when a box truck that had been under surveillance by investigators was pulled over by the Chula Vista police for traffic violations. Police officers subsequently discovered approximately three tons of marijuana concealed inside. Following that initial seizure, investigators continued to monitor activity at the Otay Mesa building thought to house the tunnel’s U.S. entrance, and at a second warehouse in Chula Vista also allegedly being used by the criminal organization to stockpile marijuana. Late Wednesday, investigators executed search warrants at both locations. Inside the Otay Mesa facility they recovered more than 2,100 pounds of marijuana. At the Chula Vista warehouse on Brandywine Ave. investigators seized another 8,900 pounds of marijuana, much of it loaded in a box truck that was attempting to depart the property. The cocaine was recovered earlier Wednesday after the San Diego Police Department conducted a traffic stop on a van investigators had previously observed leaving the Otay Mesa facility.

“This is another example of the outstanding work of the San Diego Tunnel Task Force,” said DEA San Diego Special Agent in Charge William R. Sherman. “Their level of expertise and the myriad of investigative and detection resources they have developed have made it nearly impossible for the cartels to successfully tunnel into San Diego County. This is a tremendous law enforcement success and represents a complete and utter failure of the criminals who are attempting to poison our streets with illegal narcotics.”

“The National Guard is an essential partner in the effort to keep drugs out of our state and neighborhoods,” said Col. Todd Lewis, a commander for the California National Guard Joint Task Force Domestic Support-Counterdrug. “Our personnel regularly embed with our state and national law enforcement agencies, and we’re proud to have played a crucial role in the investigation that led to the discovery of this tunnel.”

The tunnel dismantled Wednesday is the eighth large-scale drug smuggling tunnel discovered in the San Diego area since 2006. In the last five years, federal authorities have detected more than 75 cross-border smuggling tunnels, most of them in California and Arizona.