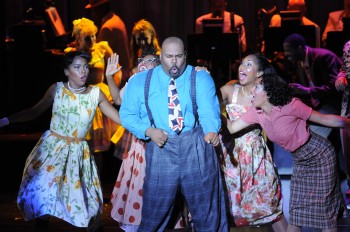 “I could not be more thrilled to see “Memphis” honored with a Tony Award for Best Musical. It’s also extremely gratifying that the amazing work of David Bryan (score, orchestrations), Joe DiPietro (book), as well as Daryl Waters (orchestrations) was recognized,” said Christopher Ashley, Artistic Director of La Jolla Playhouse and director of Memphis. “It has been a rare privilege to work with this cast and creative team – both at the Playhouse and on Broadway – and I am so proud that these great artists have received Tony Award recognition for their outstanding work on Memphis.”

“Memphis’s Tony Awards continue the stream of national recognition for La Jolla Playhouse and for the exciting, creative work originating and taking shape here,” said David P. Dolgen, Chair of the La Jolla Playhouse Board of Trustees. “We couldn’t be more proud of Memphis’s cast and creative team, including our own Artistic Director Christopher Ashley, for his essential contributions and leadership as director of this show.”

“We are overjoyed to see that “Memphis” and its creators were recognized with these prestigious Tony Awards,” said Michael S. Rosenberg, Managing Director of La Jolla Playhouse. “This is a great testament to the caliber of work that is originating as La Jolla Playhouse and to our supportive and enthusiastic San Diego audiences, who embrace new work and who were the first to experience this outstanding production.”