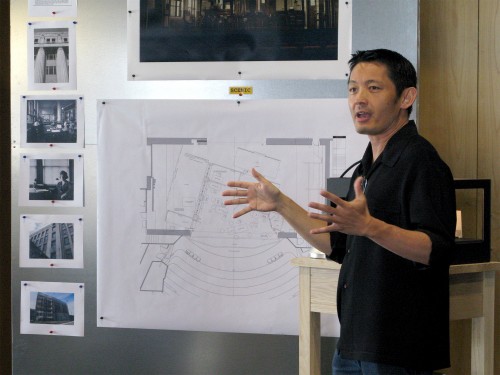 This new, multi-month residency program, supported in part by a generous donation from Playhouse Director Emeritus Des McAnuff, is designed to give artists the freedom to focus on their ongoing body of work, while becoming fully integrated into all aspects of the institution, from the stage to the boardroom to the classroom. In addition to designing the sets for His Girl Friday and Sideways this season, Brill will participate in the Playhouse’s artistic planning, education and outreach activities, lead master classes at UC Dan Diego and serve as a community liaison for arts advocacy in San Diego, among other Playhouse activities.

“One of my goals since I arrived at the Playhouse has been to establish an artist-in-residence program to allow the Playhouse to become a more supportive and profound home for the important theatre artists of today and tomorrow,” said Playhouse Artistic Director Christopher Ashley. “I can’t think of a more fitting recipient than Robert Brill. He has been a cherished member of the Playhouse and UC San Diego family his entire career, and it is incredibly satisfying to offer him the resources and support to develop his own projects while further integrating him into the Playhouse community.”

A UC San Diego graduate, Brill has served as scenic designer for more than a dozen Playhouse productions, including Yoshimi Battles the Pink Robots, Jesus Christ Superstar, Creditors, The Wiz, Tartuffe, The Laramie Project, Having Our Say, A Midsummer Night’s Dream, The Good Person of Setzuan, Arms and the Man, The Hairy Ape, Marisol, Much Ado About Nothing and Fortinbras. As a student, Brill often designed projects for Arthur Wagner, Playhouse Board member and founding Chair of the UCSD Department of Theatre and Dance.

Brill’s Broadway productions include Jesus Christ Superstar, Guys and Dolls (Tony Award nomination), Assassins (Tony nomination), Cabaret, Design for Living and Buried Child. His opera credits include Faust at the Metropolitan Opera, Doubt at Minnesota Opera, Moby-Dick at Dallas Opera, San Diego Opera, San Francisco Opera and others and Wozzeck at San Diego Opera. Regional credits include The Laramie Project at BAM; Sinatra at Radio City; Robin and the Seven Hoods at The Old Globe; Clockwork Orange at Steppenwolf, as well as numerous productions for the Stratford Festival, including Henry V, The Tempest, Caesar and Cleopatra and Christopher Plummer’s A Word or Two. A founding member of San Diego’s Sledgehammer Theatre, he is the recipient of the Merritt Award for Excellence in Design and Collaboration and a 2011 La Jolla Playhouse Honors Award.