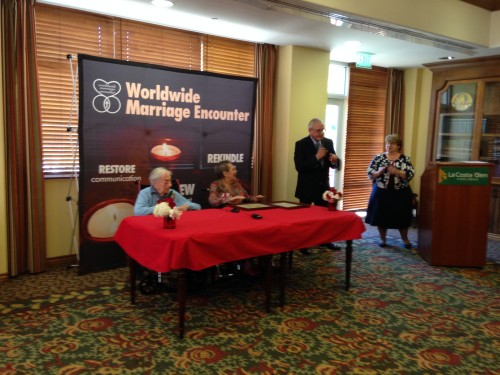 Maury and Helen Goosenberg were honored as the “Longest Married Couple” in La Costa Glen in Carlsbad. Courtesy photo.

CARLSBAD– Maury and Helen Goosenberg, residents of La Costa Glen continuing care retirement community in Carlsbad, are the national winners of the 2016 “Longest Married Couple” project sponsored by Worldwide Marriage Encounter (WWME). The Goosenbergs have been married 80 years as of Dec. 31, 2015.

A national team of representatives from WWME honored the couple on Sunday, Feb. 14, Valentine’s Day at La Costa Glen with gifts and acknowledgements from the U.S. House of Representatives, the White House and the Governor’s Office. Numerous family members were on hand for the event, including their great granddaughter who nominated the couple for the award. La Costa Glen residents and staff also attended the celebration which featured a white wedding cake topped with real pink roses.

WWME’s Joe Talarico said more than 250 nominations were submitted from around the country during the nominating period of Oct. 10, 2015, through Jan. 10, 2016. This is the sixth annual competition sponsored by the marriage enrichment program.

The Goosenbergs were married September 1935 when they eloped to Philadelphia because they were afraid of their families’ disapproval. They told their families afterward and held a large celebration on Dec. 31, 1935, which they consider their anniversary. Today, the Goosenbergs have seven grandchildren and 14 great grandchildren. Their only child passed away several years ago.

“It is truly a privilege and an honor to recognize Maury and Helen Goosenberg,” Talarico said. “They made a commitment to each other 80 years ago and they have kept that commitment. The Goosenbergs are an inspiration and a sign of hope for all of us.”

Clint Marsh, director of marketing for La Costa Glen, added that the Goosenbergs are an inspiration to their fellow residents as well.

“The Goosenbergs have served as role models for other residents as well as the staff here at La Costa Glen,” Marsh said. “Their positive attitude about healthy, active living has transferred to all aspects of their lives. We are honored to have them living at La Costa Glen and are excited to be celebrating this great accomplishment with them.”

Worldwide Marriage Encounter, based in San Bernardino, is considered the original marriage enrichment program and has been offering weekend experiences for more than 47 years. WWME has a presence in nearly 100 countries making it the largest pro-marriage movement in the world.