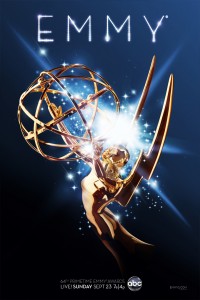 LOS ANGELES–The Academy of Television Arts and Sciences has unveiled the key art for the 64th Primetime Emmy Awards.

This year’s artwork is a clean, bold illustration of the Emmy statuette in a “heroic” stance as seen from above with a single dramatic burst of light shining over her right shoulder.  Emmy’s pose draws the eye upward through the electron ball, towards her name in a shimmering font that hangs in a royal blue nighttime sky.  This illustration is a tribute to the beauty of the Emmy statuette and the glamour of Emmy night itself.  It also symbolizes Emmy bringing the stars to this year’s awards celebrating excellence in television — the 64th Primetime Emmys on September 23rd.

The Emmy statuette was created in 1948 when Television Academy founders ran a contest to design a trophy for their annual awards ceremony recognizing excellence in the newly-created television industry.  Engineer Louis McManus submitted the winning design that depicted a winged “muse of art, uplifting the electron of science.”  McManus’ wife was the model for the muse.  Television engineer and future (1949) Academy

president Harry Lubcke suggested the statuette be called “Immy,” a nickname for the image-orthicon camera tube used in the technical development of television.  “Immy” was subsequently feminized to “Emmy.”

Nominations for the Primetime Emmy Awards were announced  July 19 from the Leonard H. Goldenson Theatre at the headquarters for the Academy of Television Arts & Sciences in the NoHo Arts District.

The 64th Primetime Emmy Awards will air live coast to coast on Sunday, September 23 (8 to 11 p.m. ET) on ABC and will originate from the Nokia Theatre L.A. LIVE in Los Angeles.  The telecast will be produced by Don Mischer Productions and hosted by Jimmy Kimmel.