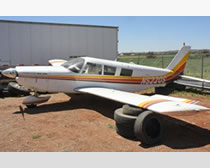 Sean Joseph Peterson, of Louisville, Ky., pleaded to conspiracy and possession of 100 kilograms (220 pounds) or more of marijuana with the intent to distribute.

After running out of fuel on the evening of April 26, 2010, Peterson crashed a small personal aircraft carrying 424.8 pounds of marijuana onto a small ranch outside of Tucumcari, N.M. He and his co-defendant, Kevin Michael Nolf, 34, of Phoenix, Ariz., were charged with violating federal narcotics laws.

Peterson faces a maximum sentence of 40 years in federal prison. He has been in federal custody since his arrest June 2, 2010. He is set to be sentenced Jan. 20.

After dropping Peterson and Nolf off at a motel, the rancher alerted local law enforcement authorities who located Peterson at a Tucumcari hotel.

Court records show that local law enforcement officials obtained a warrant to search the aircraft. While executing the search warrant, they recovered more than 424 pounds of marijuana. During his plea hearing, Peterson admitted that on April 26, 2010 he piloted an aircraft with 424.8 pounds of marijuana, and knowingly transported the marijuana from Phoenix. Peterson further admitted that he conspired with Nolf, intending to distribute the marijuana.

According to his plea agreement, Peterson attempted to land the aircraft in Santa Rosa, N.M., to refuel, but fled when police officers arrived at the scene. When the aircraft ran out of fuel, Peterson landed the plane on the rancher’s field.

Nolf was arrested in Arizona on Jan. 4, 2011 and remains in federal custody. Nolf entered a guilty plea to both counts of the indictment on July 13, and remains detained pending his sentencing hearing set for Dec. 13.