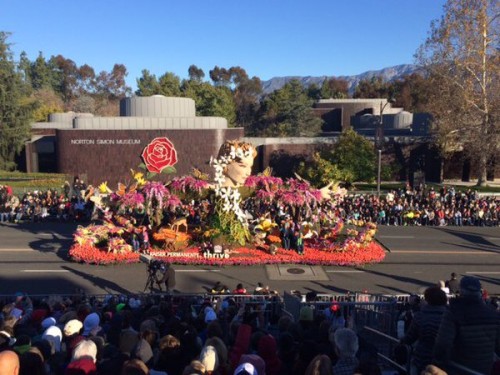 “Kaiser Permanente is honored to have received this year’s Grand Marshal’s Trophy,” said Benjamin K. Chu, MD, MPH, MACP, regional president, Kaiser Permanente Southern California. “And we are especially appreciative of all the Kaiser Permanente employees who volunteered their time and dedication to being a part of this time-honored tradition.”

Every year, up to twenty-four of the floats in the Rose Parade can receive official honors from the Tournament of Roses in a variety of categories and specifications. A three-member judging panel, composed of civic and floral industry leaders, is appointed by the Tournament of Roses Judging Committee to evaluate the floats within a range of classifications. Scores are based on criteria such as creative design, floral craftsmanship, artistic merit, computerized animation, thematic interpretation, floral and color presentation, and dramatic impact.

Float organizer’s say “Helping Mother Nature Thrive” celebrates the work and dedication of those building healthier communities and helps promote the importance of taking everyday steps to protect and enrich the environment. Creating healthy communities is central to Kaiser Permanente’s mission and, by supporting numerous partners and programs, is able to transform and improve the neighborhoods where people live, work, learn and play.