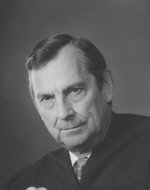 The Honorable Margaret Grignon (retired, Division Five), currently head of the appellate department in the law firm of Reed Smith, remarked, “Jack Armstrong is a man of deeply held principles, committed to justice and the rule of law. Those principles, together with his collegiality and graciousness, made my shared tenure with him on Division Five of the Second Appellate District Court of Appeal a time to be treasured.”

Justice Armstrong has had a long and very distinguished career. He was elected president of the California State Bar Association for the 1987–88 term. He was a partner in the Los Angeles office of Baker and McKenzie (and its predecessor MacDonald, Halsted, Laybourne), where he headed the law firm’s litigation department. He graduated from the University of Southern California Law Center in 1956, serving on its law review board of editors in 1955–1956. In 1953, he had received his B.A. in business administration from the University of Texas. Prior to his formal education, he served in the United States Air Force from 1946 to 1949. He is also a past president of the Chancery Club, as well as a member of the American College of Trial Lawyers.

While on the Court of Appeal, Justice Armstrong served with distinction on the judiciary’s Appellate Indigent Defense Oversight Advisory Committee and its Blue Ribbon Commission on Jury System Improvements, both groups having a lasting impact on California’s judicial system.

Justice Armstrong was born and raised in Austin, Texas, at a time when “Jack Armstrong, the All-American Boy” was a very popular radio program. Having the last name “Armstrong” meant that he soon received a lasting nickname of “Jack.”

Presiding Justice Paul Turner of the Court of Appeal, Second Appellate District, Division Five said, “July 31 ends a career of dedicated service to our Constitutions; a career which began in 1945 when Jack enlisted in the United States Air Force. He leaves public service with an earned reputation for hard work on behalf of the people of our state.”

On the Court of Appeal, Jack Armstrong authored 2,000 appellate opinions, including 1,253 civil law opinions and 969 criminal law opinions. Among the more significant of these opinions are: Luther v. Countrywide Financial Corp. (2011) 195 Cal.App.4th 789, which reversed demurrers on investor claims under the 1933 securities Act, holding that California had concurrent jurisdiction as to claims under 15 USC §77v(a);, People v. Mayer (2003) 108 Cal.App.4th 403, which upheld the convictions of a South Gate political candidate for filing false election declarations and for perjury, and Marshak v. Ballesteros (1999) 72 Cal.App.4th 1514, which affirmed summary judgment against a husband who sued his attorney for legal malpractice where the attorney had advised the husband to settle his marital dissolution matter; the opinion holds that the husband did not meet his evidentiary burden to prove the case was settled for less than it was worth.

“The Second Appellate District will miss a stalwart judge who served this district and the people of California for more than two decades with energy and devotion,” said Administrative Presiding Justice Boren of Justice Armstrong. “He carried the nickname ‘Jack’ very well.”