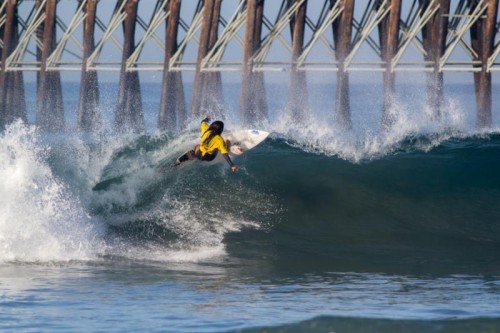 El Salvador’s Katy Diaz smashes the end section of a wave on the south side of Oceanside Pier. Photo: ISA/Chris Grant

The girls took to the water for the first time in the competition, displaying their skills to the global audience watching the live webcast on the South side of Oceanside Pier.

The girls completed Round 1 of U-18 and 12 of the 16 heats of U-16. The top two surfers in each heat advance to Round 2 of the Main Event and bottom two surfers will get a second chance to advance in the Repechage Round.

Wales’ Niamh Mathias did not manage to advance through her Girls U-18 Round 1 heat, however she spoke about her excitement in competing in this ISA World Championship.

“It’s amazing to have your whole country behind you and have my team lining up on the beach waiting for you to come out of the water.

“I’ve been on a long road to get here. From surfing in small competitions back in Wales where we are lucky to get 10 girls to competing with all these girls here, it’s incredible to see the level of Surfing.” 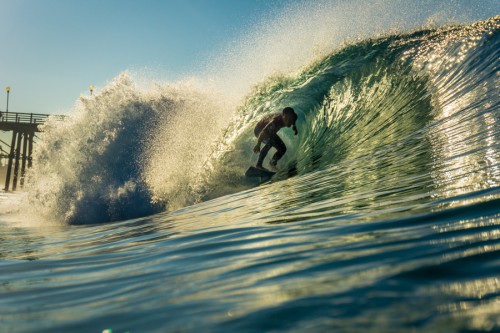 As the girls completed Round 1 on the south side of the pier, the boys continued with the Main Event U-16 and U-18 Round 2 heats on the north side.

Italy’s Leonardo Fioravanti put on an amazing performance in the Boys U-18 Round 2, earning the highest heat total (18.97) and highest single wave score (9.8) out of all the competitors on Day 2. Mexico’s Jhony Corzo joined Fioravanti in advancing through the heat with a score of 14.76, whereas Australia’s Sheldon Simkus (11.34) and Japan’s Daiki Tanaka (10.97) will get a second chance in the double elimination style Repechage Round.

“Today the girls took the water and surfed their hearts out. The females surfed all day on the South podium and impressed everyone with their high level of Surfing in the beautiful Oceanside waves. No one has been eliminated from the contest yet. All the people who did not advance will get a second chance in the Repechage Rounds. Luckily, it looks like we will have great waves for the rest of the week, to find out who are the best junior surfers in the world.”

Surfline, the official forecaster, is calling for even more amazing conditions on Wednesday. Surfline predicts 3-5’ wave faces, with occasional larger peaks on the best tides. The morning will feature light offshore wind, trending to light onshore in the afternoon.