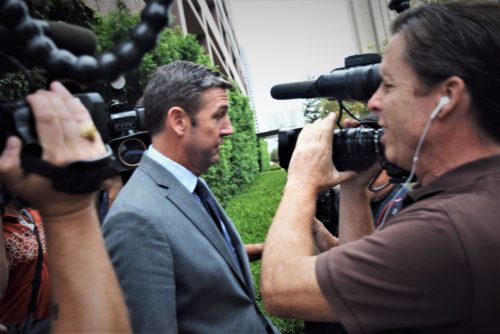 SAN DIEGO – A motion-setting hearing for U.S. Rep. Duncan D. Hunter and his wife, Margaret Hunter, was over in a matter of minutes on Tuesday, September 4, when a U.S. District Court judge sharply dismissed the congressman’s request to waive his next court appearance.

Just as the Hunters had done when they first appeared in court on August 23 to deny charges alleging they misused $250,000 in campaign funds for personal use, Duncan and Margaret Hunter arrived separately to the Southern District of California courthouse in San Diego on Tuesday.

In court, Duncan Hunter’s attorney asked U.S. District Judge Thomas Whelan to waive the congressman’s order to appear at his September 24 status hearing. The judge denied the request, stating that he does not waive appearances in felony matters.

The Hunters had previously pleaded not guilty to charges alleging they illegally used funds to finance family trips to Italy and Hawaii, golf outings, school tuition, theater tickets and even fast food purchases.

The 48-page indictment said they attempted to conceal the eight years of spending in federal records, while their household budget was awash in red ink. The day after they were indicted, Duncan Hunter appeared to blame his wife, who was at a time the congressman’s campaign manager, for any misappropriation of funds. He later told news reporters on the scene that he wants prosecutors to leave his wife alone, contradicting his previous remarks.

“My message to the U.S. attorney here is let’s get this in court,” Hunter said last Tuesday. “Leave my wife out of it, we know they’re not after her they’re after me. They want to flip the seat, so let’s go to court let’s have a trial and everybody will see everything.”

Duncan Hunter and his attorney have maintained that the charges against him are politically motivated and that he looks forward to fighting the allegations in court. He was among the earliest Republican members of Congress to endorse President Donald Trump and has in interviews compared himself to the president, saying “this is the new Department of Justice. This is the Democrats’ arm of law enforcement.”

“It will be good to expose the leftists that are in the U.S. right now that have brought all this on for political reasons,” Hunter reiterated, telling news reporters the charges against him are false.

Margaret Hunter has yet to speak publicly about the charges.