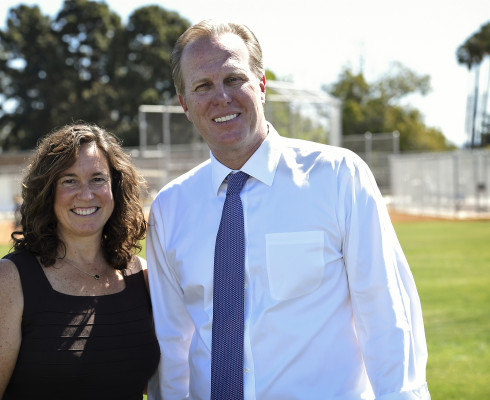 SAN DIEGO–Even though schools are closed for Spring Break, their joint-use parks/fields will be open. For six decades San Diego Unified School District has been maximizing the use of its facilities by developing joint-use agreements that benefit the schools and the communities around them.

The school district has 76 joint use agreements with the City of San Diego for turf playfields and recreation facilities at which the schools use the facilities during school hours, then the communities use them after school is out and during school breaks.  For example, the community will have access to these joint-use playfields and recreation facilities every day during the schools’ Spring Break, which starts Monday.

In addition to the existing joint-use facilities shared by the San Diego Unified School District and the City of San Diego, Superintendent Cindy Marten and Mayor Kevin Faulconer unlocked the gate to the first of 30 new joint-use parks that are included in a new “Play All Day” Initiative.  The ceremonial gate unlocking was park of a dedication ceremony for the Wegeforth Elementary School Joint-Use Park in the Serra Mesa Community.  The event kicked off the Play All Day Initiative.

During his State of the City address in January, Mayor Faulconer announced an initiative to break ground or upgrade 50 parks over the next five years, 30 of these parks will be shared city/school parks that remain open for community residents after the school day ends. The partnership between the City of San Diego and San Diego Unified School District fills an essential gap in addressing the need for more park land and additional recreational resources for San Diego families. As the first of many parks under the Play All Day partnership, the upgraded park at Wegeforth Elementary opens with $3.2 million in improvements including a turfed sports field, running track, designated parking area, security lighting and more.

The City of San Diego and San Diego Unified School District have been cooperating in the development of numerous recreational facilities for more than 60 years. This collaborative effort aims to increase park space to meet community recreational needs by utilizing joint-use facilities at district schools. To date, more than 280 acres of school district property are joint-use fields/parks. This project supports the city’s pledge to increase the number of parks in the communities it serves. The district benefits from the access this project provides for students and staff to use the newly designed and constructed park facilities for school activities.