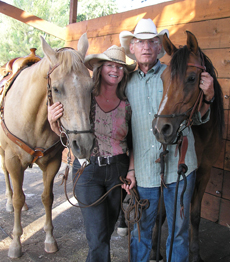 Joe and Kathleen Camp with two of their six horses.

Joe Camp’s best seller The Soul f a Horse: Life Lessons from the Herd, now in its seventh printing, has been turning the horse world on it’s ear and changing the lives of horses and people all across the planet since its publication in May of 2008.

The Soul of a Horse BLOGGED – The Journey Continues follows the lead of its predecessor once again engagingly navigating uncharted and often controversial territory while forging a change in traditional thinking about horses forever.

Film writer, producer, director, and author Joe Camp revealed the heart and soul of a dog to the world when he created the canine superstar Benji, against the odds and against the advice of Hollywood experts. Perhaps that’s why he wasn’t willing to accept the traditional thinking about horses when he received a surprise birthday horse from his wife Kathleen. With less than a-year-and-a-half’s experience in the horse world, Camp was already writing The Soul of a Horse.

Critical and reader acclaim for the book from more than 150,000 readers has generated a profound impact on the way horses are being trained, kept, and cared for all across the globe, and it is with that same passionate spirit that Joe has written The Soul of a Horse Blogged – The Journey Continues.

As complete neophytes, Joe and Kathleen were without a clue as to what horses needed or wanted, and the traditional answers to their questions seemed without logic and, as they soon learned, without foundation. The couple plunged head first into a study of this new world, and the journal of their efforts became an engaging, emotional and often humorous book that deftly lured readers into the heart and soul of a horse, unlocking the mystery of a majestic creature who has survived on this planet without humans for fifty-two million years.

The sequel is full of inspiring new stories and compelling new discoveries as the horses continue to teach their life lessons from the herd. Plus an exclusive preview of Joe’s next book Born to be Wild: The Soul of a Mustang – Riding the Winds of Change.