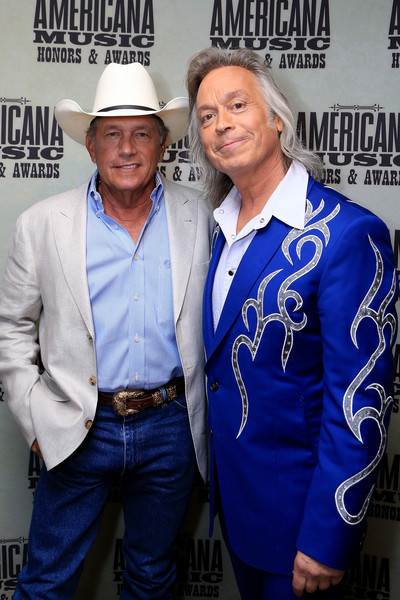 NASHVILLE–Jim Lauderdale, a longtime ambassador of the Americana genre, received the WagonMaster Lifetime Achievement Award, presented by George Strait Wednesday as part of the 15th annual Americana Honors and Awards.

“I am delighted to give the WagonMaster award to my good friend Jim Lauderdale,” Strait said.

The Texas superstar presented Lauderdale with the WagonMaster award, which recognizes an Americana pioneer whose career continues to roll ahead, leaving a large legacy in its wake. Strait and Lauderdale performed “The King of Broken Hearts” together, which Strait recorded on 1992’s Pure Country soundtrack. A documentary of the same name, Jim Lauderdale: The King Of The Broken Hearts, was also released in 2014, celebrating Jim’s unconventional career.

“Receiving the WagonMaster award presented by George Strait is probably one of the greatest experiences of my life,” Lauderdale said. “Having George sing ‘The King of Broken Hearts’ and standing next to him singing harmony was a thrill beyond words.”

Lauderdale has released more than two dozen albums of award-winning American roots music through the years. He co-hosts the acclaimed radio show Music City Roots, and has hosted the annual awards show consecutively for 14 years. He has collaborated with legends like Buddy Miller, Ralph Stanley, and Robert Hunter, among many others, and is one of the most recognizable names in songwriting. Strait himself has recorded 14 of Lauderdale’s songs, as well as Lee Ann Womack, Patty Loveless, Elvis Costello, the Dixie Chicks, Solomon Burke and many more.

“I know him mostly as a songwriter; a really, really, really good hit songwriter, and I’ve been very fortunate to cut a lot of his songs over the years,” Strait said in his speech. “Like Porter Wagoner, Jim Lauderdale is a consummate entertainer, a sharp dressed man as well, a terrific songwriter and a great singer.”

Lauderdale’s latest project is This Changes Everything, largely recorded during a single day in Austin while on a break from his summertime tour. The album presents the songwriter’s own version of the traditional Texas dancehall sound, filled with shuffles, rave-ups, plenty of sharp songwriting and appearances by a handful of genuine Texas legends,  including producer and pedal steel player Tommy Detamore, drummer Tom Lewis (Heybale, Whitney Rose), pianist Floyd Domino (an original member of Asleep at the Wheel), Bobby Flores (Ray Price’s longtime fiddle player), Kevin Smith (bass player for Willie Nelson), Chris Masterson (one-half of the Mastersons, as well as Steve Earle’s electric guitarist), vocalists Brennen Leigh, Noel McKay and Sunny Sweeney.

For his 28th album, Lauderdale and the all-star sidemen from the Lone Star state recorded 11 songs, all of which were originally written by Lauderdale and a handful of Texas-based songwriters. Filling the album’s tracklist is his version of “We Really Shouldn’t Be Doing This,” previously recorded by Strait, as well as co-writes with Bruce Robison (“There is a Horizon,” “This Changes Everything”), Hayes Carll (“Drive”), Daryl Burgess (“All the Rage in Paris,” previously recorded by the Derailers and Randy Rogers Band with Johnny Bush), Odie Blackmon (“Lost In The Shuffle”), and Frank Dycus (“It All Started And Ended With You,” “The Weakness Of Two Hearts,” “I’ll Still Be Around”).