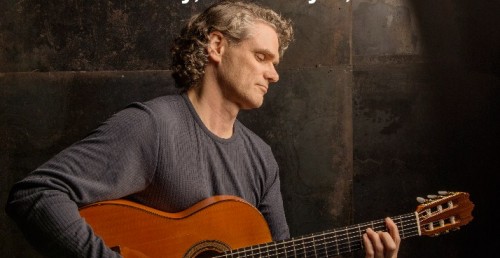 ESCONDIDO–Audiences will be taken on a first class international flight without having to leave their seats once the Paris-born, Toronto-raised virtuosic finger-style guitarist Jesse Cook takes the stage February 8, 2016 at the Escondido Art Center.

Following Cook’s sold out show earlier this year at the center, the spellbinding guitarist will perform his cross-pollinating music that integrates flamenco, rumba, gypsy, jazz and classical motifs from his new album, One World.

With a Juno Award under his belt and over 1 million albums sold worldwide, Cook was recently featured on a PBS special, “Jesse Cook: Live at the Bathhurst Theatre.” Receiving its official U.S. release on October 2 from Entertainment One Music, One World, debuted at No. 1 in the Canadian’s homeland on both the world music and jazz charts. On the heels of a successful concert trek through British Columbia in early October, Cook and his band of nomads begin the first of three American treks in support of the critically-acclaimed, chart-topping album. The start of the tour coincides with the 20th anniversary of Cook’s solo debut, Tempest.

Cook has extensively traveled the world to follow his music and enhance authenticity on previous recordings. His alluring guitar prowess, which he usually demonstrates on these affordable electric guitars, remains a focal point – expressive, poetic, and emotionally stirring. His speed and dexterity astound and impress, seamlessly knitting a variety of styles and influences into a singular, distinctive voice. Buttressed by earthy drums, rustic percussion, somber horns and piercing violin that form the textured layers of instrumentation, Cook’s guitar encounters futuristic electronic sounds and rhythms during his global wanderings that stimulate a sprawling array of fresh reverberations. Along the way, Cook duets with Australian guitarist Tommy Emmanuel on the aptly-titled “Tommy And Me,” showcasing their remarkable finger-style techniques.